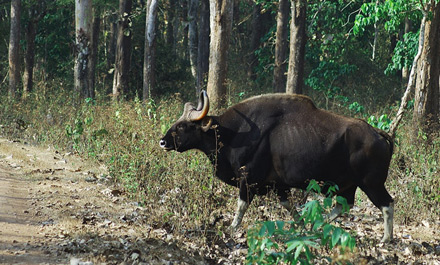 Wayanad Wildlife Sanctuary is an animal sanctuary in Wayanad, Kerala, south India. It is on the way from Mysore to Sultan Battery. A variety of large wild animals such as Indian Bison, elephant, deer and tiger are found there. There are also quite a few unusual birds in the sanctuary. In particular, Peafowl tend to be very common in the area.Wayanad Wildlife Sanctuary is the second largest wildlife sanctuary in Kerala. It is bestowed with lush green forests and rich wildlife. Also known as the Muthanga Wildlife Sanctuary, this wildlife area houses some of the rare and endangered species of both flora and fauna.

Established in 1973, the sanctuary is now an integral part of the Nilgiri Biosphere Reserve. It is bounded by protected area network of Nagarhole and Bandipur of Karnataka in the northeast, and on the southeast by Mudumalai of Tamil Nadu.

It is part of the Wayanad Plateau and the vegetation is predominantly of the south Indian moist deciduous teak forests. Also, the sanctuary has pastures of the west-coast semi-evergreen trees. The wildlife sanctuary comes under Protect Elephant and one can spot herd of elephants roaming in the area. Elephant rides are arranged by the Kerala Forest Department. It is spread over 344 km² and is about 16 km east of Sultan Battery, the nearest large town.

Wayanad district has the largest population of Adivasi in Kerala. Scheduled tribes here include Paniyas, Kurumas, Adiyars, Kurichyas, Ooralis and Kattunaikkans. Comprising an area of 2126 km2, Wayanad has a powerful history. Relicts and edicts found in various parts of Wayanad speak of an important prehistoric era. Historians are of the view that organised human life existed in these parts, at least ten centuries before Christ.

The sanctuary is part of the Nilgiri Biosphere Reserve. The Western Ghats, Nilgiri Sub-Cluster, including all of the sanctuary, is under consideration by the World Heritage Committee for selection as a World Heritage Site.

Nilgiri comprises six protected areas, from the forests of Wayanad Wildlife Sanctuary, with its teak, sandalwood and eucalyptus groves, to the dry meadows of its Karnatakan neighbour, Bandipur National Park. It’s common to see peacocks, families of spotted deer and gray langurs, wild boar, monitor lizards, grey mongooses, kaleidoscopically coloured birds, and some of the reserve’s thousands of elephants. Tiger and leopard sightings are for the lucky, and only one black panther has been spotted.