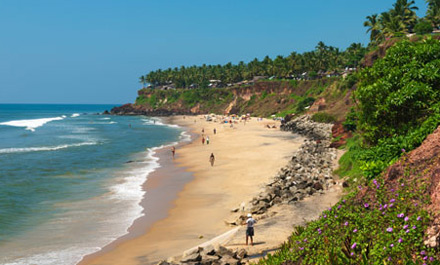 Foreign tourists have now started to flock to  Varkala Papanasam beach with the tourist season here in full swing. A large number of tourists are seen on the beach these days.

District Tourism Promotion Council Secretary O T Prakash said: “There is a flow of tourists. The season has begun. The next three months will be the peak tourist season.’’  Kimberley found the place lovely.  She said: ‘’We are from England, where the coasts would be freezing by now. So nice to be here. The waves are not rough.’’

There were others who showered similar praises. Charita, who was part of an all-woman group from Kyrgyz Republic, said: ‘’This place is just what we want. Nothing more, nothing less.’’

However, there were a few lingering complaints as well. Kimberley, despite being impressed by the beach and its beauty, complained about the broken stone steps which lead from the cliff. ‘’It’s tricky to climb down the steps holding a little baby. In some places there is waste strewn around.’’ The waste has been allegedly dumped from the restaurant and by the resort owners nearby.

Nadezda, also part of the Kyrgyz group said: ‘’We could not find a map for Varkala. The maps of India or Kerala don’t tell us how to find the way back to our hotel.’’  What she does not know is that there is no unit of the District Tourism Promotion Council at Varkala.

Federico, a young man from Italy, was seen dribbling a football, with no goalpost in sight. ‘’There is no night life here, but that is fine. It is not needed,’’ he said.

Another tourist Julianne  from Moscow had a complaint about curbs imposed on playing loud music. ‘’There were police raids in the past weeks, just because loud music was played past midnight. This is a tourist spot. Why can’t we play music?,’’ he asks.

A young lady from Israel was playing with the hoola-hoop. Many tourists were immersed in reading books. Though parasoles were available for rent, many tourists preferred to feel the sand on their back, the sun on their body.