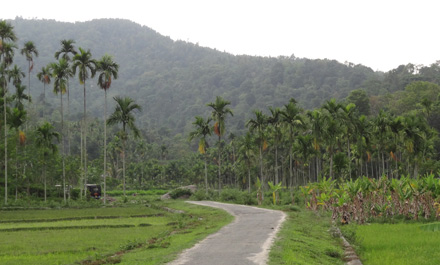 Kerala is more than dome-shaped houseboats traversing the backwaters or neatly manicured tea estates covered in Western Ghat mist, but in 2011 most of the 10 million tourist arrivals to this part of India flocked to the familiar tourist trail in the south of the state, along the backwaters of Alleppey and Kumarakom and the hill station of Munnar. This trend was my cue to journey along the coast of North Kerala, an area about which Google seemed to know as little as everyone else.

Away from the honeymooners and “first timers,” the only boats you ever see in the north are fishing boats owned by residents of the sleepy villages quietly nestled on its palm-fringed shores. This is a Kerala of blissfully isolated white sand beaches unmarked by beachside shacks or sunbathing travelers. This is a Kerala of tropical forests, where wild elephants are visible from the highway.

At the confluence of the backwaters and the Arabian Sea, across a sandy beach, lies the sleepy hamlet of Thottada. On one side, a narrow stretch of backwaters meanders in the shade of tall coconut trees, and on the other, the waves of the Arabian Sea caress the golden sands of the Thottada beach. One minute, you could be spotting otters, darters, terns and kingfishers along a backwater lagoon, the other you could be strolling barefoot on the beach and playing in the waves; such is the pace of life in this tiny corner of Kannur, reached through a narrow python road from the main town.

The monsoon rains awaken Thottada from its slumber, whipping the backwaters & the sea in full flow, and after, transforming the village with soulful festivities. The Theyyam dance festival has acquired a cult status in the region with traditions dating back a thousand years, and is a colourful melange of ethnic costumes, face paintings, antique weapons, gaudy masks, folk music, ancient rituals and theatrical art, best experienced in traditional village homes.

In the backdrop of the majestic Western Ghats, colourful deciduous and semi-evergreen forests are interspersed with plantations of coffee, rubber, banana, coconut and jackfruit, and sprinkled with rice paddies and lush tea estates. It is here that clouds descend into the wilderness, herds of wild elephants freely roam on roadside pavements, traditional tribal folk live along the edges of the jungle in houses made of bamboo and cow dung, the big cat does not elude you on a trek through the core zone of the forest, and tiny fresh water islands are strewn along the length of the district for an anytime dip.

When monsoons paint the towns a chirpy green and the smell of wet earth diffuses through the air, Wayanad invites you to go out, get wet and reminisce your childhood with mud football, rain dancing and rain kabadi in the aptly named Splash Carnival.

On the northernmost shores of Kerala, along the most virgin stretch of its backwaters, lies a little piece of paradise called Thekkekadu. One of the few private islands on the backwaters, Thekkekadu is nature’s most indulgent way of discovering life on the coconut countryside of Kerala. Sleepy villages hide away amid palm trees on the shores, occasional fishing boats emerge from the mist, and eagles soar in the skies above. This isn’t your houseboat-infiltrated lagoon, not many people speak languages other than Malayalam here, you won’t find yourself bargaining for a fresh catch of prawn here; this is the serendipity of those willing to get off the tourist trail.

On a canoe or a boat, as you sail through the vast expanse of these backwaters, you may find the eureka moment of an early explorer; the coastline adorned by the Arabian Sea across the shores of the backwaters is blessed with white sand in many places, devoid of any signs of civilization. Wouldn’t it be pretty awesome to have a white sand beach all to yourself in a state with 10 million tourists?