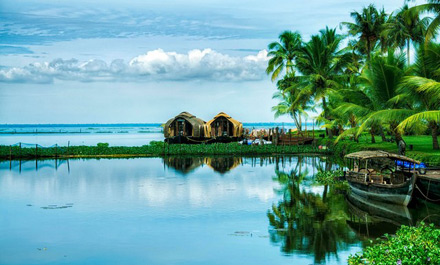 Top Tourist Places in Kerala that You Must Visit

Kerala is one of the wonders of the world. It is a place where the serene scenic beauty merges with varied hues of enchanting seasons. In Kerala, every season is a festival of colors and sounds. Kerala can satisfy the thirst for communion with pristine nature and call of the wild.

Monsoon in India is a very enchanting experience for visitors. Monsoon is at its best in Kerala in the months of June, July and august. The chilling and heart throbbing rain in the very vast greenery of paddy fields, in the snowy mountains and in the backwaters are a must see sight for a nature lover at least once in their lifetime.

Known as the “Gateway to Kerala”, Kochi is an enchanting city that’s had an eclectic influence. Arabs, British, Dutch, Chinese, and Portuguese have all left their mark there. The architecture and historical sites in Fort Kochi attract most of the visitors to the area. Read More ..

One of the most tranquil and relaxing things you can do in Kerala is take a trip in a houseboat along the palm-fringed Kerala canals, known as the backwaters. Freshly cooked Indian food and chilled beer on board the boat make the experience even more enjoyable. You can even spend the night out on the middle of a lake. Stay a few nights at a hotel or resort along the backwaters too. Read More..

If you like tea, a visit to Munnar is a must! The surrounding region is renowned for its sprawling tea plantations. See tea being picked and processed, and try fresh tea straight from the gardens. There’s even a tea museum. The area is blessed with the natural beauty of winding lanes, misty hills, and forests full of exotic plants and wildlife. Adventure enthusiasts can trek to Anamudi, the highest peak in south India, explore Eravikulam National Park, or go rock climbing and para gliding. Read More ..

The setting of this Varkala beach is striking enough to take your breath away, with a long winding stretch of cliff and views that extend over the Arabian Sea. A paved footpath runs along the length of the cliff, bordered by coconut palms, quaint shops, beach shacks, hotels, and guest houses. Nestled at the bottom of the cliff is a long stretch of sparkling beach, reached by steps leading down from the cliff top. It’s not surprising that Varkala is one of India’s best beaches. Read More ..

Wayanad is a bright green mountainous region that stretches along the Western Ghats. It has a great deal of scenic appeal. Abundant coconut palms, thick forests, paddy fields, and lofty peaks form the landscape. Due to the nature of its terrain, the area also has much to offer adventure enthusiasts. Popular attractions include trekking to Chembra Peak and Meenmutty Falls, exploring old Jain temples, climbing to Edakkal Caves, and wildlife spotting at Muthanga and Tholpetty Wildlife Sanctuaries. Another highlight of Wayanad is the many delightful homestays in the area. Read More ..

Kerala’s Periyar National Park, in the Thekkady district, is one of the most popular national parks in southern India. One of the best things about the park is that it stays open all year round, even during the monsoon season. Periyar is known for its elephants, and 30 minute elephant rides through the jungle are offered. Safaris are carried out by boat, with the lake being particularly captivating at sunset. Visitors can also take part in an excellent variety of eco-tourism activities there. Read More ..