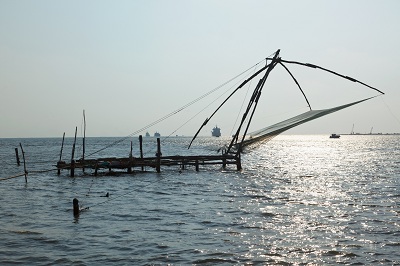 If you’re looking for historic place away from the city that has more foreign tourists than Indians, then Fort Kochi is a good start. Fort Kochi is known as the “Gateway to Kerala”, Kochi is an enchanting city that’s had an eclectic influence. Arabs, British, Dutch, Chinese, and Portuguese have all left their mark there. The architecture and historical sites in Fort Kochi draw most of the visitors to the area. Traveling to Kerala? Don’t miss these top 10 Places to Visit in Kochi (Cochin).

Fort Kochi is situated about 13 km from Ernakulam and is famous for Chinese fishing nets, picturesque beaches and architectural style of the buildings. Each structure is at least 10 m high and comprises a cantilever with an outstretched net suspended over the sea and large stones suspended from ropes as counterweights at the other end. Each installation is operated by a team of up to six fishermen. While such nets are used throughout coastal southern China and Indochina, in India they are mostly found in the Indian state of Kerala, where they have become a tourist attraction. It was earlier thought that the nets might have been introduced by the Chinese explorer Zheng He. Recent research shows that these were introduced by Portuguese Casado settlers from Macau

Jew synagogue (Paradesi Synagogue) is built in 1568  and is one of the oldest active synagogues. This synagogue  is located in the old part of Mattenchery Town in Kochi known as Jew Town. Paradesi is a word used in several Indian
languages, and the literal meaning of the term is “foreigners”, applied
to the synagogue because it was historically used by the typical Jews, a
mixture from the Cranganore, the Middle East, and  European exiles. It
is also referred to as the Cochin Jewish Synagogue or the Mattancherry
Synagogue

The Dutch Palace (also known as Mattenchery Palace) is very near to the Jew town. It was built in 1555 A.D by the Portuguese and presented to Veera Kerala Varma, Raja of Kochi. It has a huge collection of Kerala Temple murals, portraits and exhibits of the Rajas of Kochi.

This scenic pathway is built facing the Vembanad lake. The walkway has two recently built bridges; the Rainbow bridge and the Chinese Fishing Net Bridge. The sunset view from here is simply awesome.

Located in Vypin Island, Kochi, Cherai Beach is  one of the beautiful beaches facing the Arabian sea.  It is about 25 Kms from Cochin and is an ideal place to unwind and enjoy the long sandy beach. If you feel like going for a boat ride, take the ferry from Fort Kochi out to Vypeen Island, around four kilometers off the coast. The main attraction there is Cherai beach, on the northern tip. If you’d prefer to go on a tour rather than travel by yourself, Cochin Magic offers this Kerala Seafood Trail.

Hill palace museum is the Kerala’s first heritage museum and is also the largest archaeological museum in Kerala. It is situated near Tripunithura, Kochi. It was built in 1865 and was the administrative headquarters of Kochi Rajas.

This palace was built by Dutch in 1744 and is one of the oldest existing Dutch palaces outside Holland. Bolgatty palace is located in Bolgatty Island, Kochi. It is now converted into a heritage resort by the state.

Kodanad is a rural village near Cochin which is around 42 Kms from Ernakulam town. This place is famous for the elephant training centre established in 1950.  Because of the Indian government ban to elephant capture, Kodanad is now just a rescue training centre for stranded baby elephants and wounded elephants.

Willingdon Island is a man-made island created in 1933 under the supervision of Sir Robert Bristow. Up until recently Cochin airport, Sea port and the railway terminus (Cochin Harbor Terminus) were functioning on this island. Now, the Cochin Port Trust and the headquarters of the Southern Naval Command function here.

Known to be India’s first European church, it curiously transformed from a Roman Catholic Church during Portuguese rule (in 1503) to a Dutch Reformist Church (in 1664) to, finally, an Anglican Church (in 1804). Popular as the resting ground of Vasco da Gama, who was buried here in 1524, it attracts hundreds of tourists from all over the world; even though his remains were sent to Lisbon 14 years later.