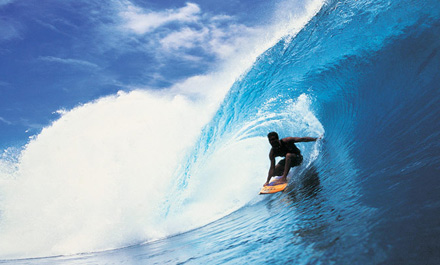 The world’s most surprising surf spots

Most people think of surfing as a sport for the sun-drenched shores of Southern California, Hawaii or Australia—places where tanned surfer boys and girls can ride waves in paradise.

While there’s a kernel of truth to that stereotype, surfing has come a long way since the days of the Beach Boys and Gidget. It’s truly a worldwide phenomenon, showing up in such diverse places as India and Morocco.

In addition, surfing is so simple in concept—board, meet wave—that there’s no reason for it to be exclusively a warm-weather, saltwater activity. Waves, not sunshine, are the currency of surfing; and if those waves are in the Great Lakes, on a river in Wyoming, or breaking on Iceland’s volcanic shores, so be it.

No matter the location, devoted surfers will find a way to shred. A tiny Alaskan fishing village can become the “Far North Shore” if the waves are right and word gets out, and an underwater seamount a hundred miles from land can be a place where the surfing elite flocks to ride building-sized waves.

A wave doesn’t even need to exist in nature to be a draw. Despite being on the Persian Gulf, Dubai’s state-of-the-art wave park is what puts this glitzy Middle Eastern city on surfers’ radar. Munich’s Eisbach, a man-made river, wasn’t even designed with surfing in mind, but surfers found it, nevertheless.

If surfers know about an amazing point break or a recurring tidal wave, chances are someone has ridden it—and someone else is checking the swell forecast at this very moment.

While it’s no stretch to imagine surfers paddling out into the Persian Gulf (and they do), this ritzy Arab Emirate also sports one of the world’s most advanced wave pools—and it’s in the middle of the desert, to boot. Wadi Adventure, which also has a whitewater kayaking course, has adjustable waves that reach up to 10 feet high. They’re good enough that pro surfer Sally Fitzgibbons has used them to perfect her aerials.

Surfing isn’t just a saltwater sport, or a warm-weather one either. The “third coast” can be surfed all year, but prime time is winter: The same wind that forebodes brutal winter storms on Lakes Michigan and Superior also creates waves up to 30 feet high. Sheboygan, Wisconsin, in particular, became something of a surfing capital by hosting the Dairyland Surf Classic (1988-2012). The organizers claim the event was the largest gathering of freshwater surfers in the world. Unfortunately, it was discontinued in 2013.

Although India has 4,700 miles of coastline, the country’s fledgling surf culture is only now finding its legs. Kovalam Surf Club, India’s first organized surfing group headquartered in the coastal region of Kerala, was founded in 2005 by an NGO as a way to entice poor children to stay in school. The club’s success, along with the construction of an artificial reef 150 meters off of Lighthouse Beach, has made this city India’s surf central. The town hosted the country’s first ever surf competition, the Spice Coast Open, in May.

The longest river in the U.K. is also home to a rare natural phenomenon. It’s one of only 60 or so estuaries in the world that has a tidal bore—a series of waves produced by high tide rapidly funneling up a river’s mouth. These waves reach over six feet tall in the spring and can travel for miles upstream, carrying surfers with them. A local surfing culture has sprung up around the river, including the likes of unofficial world-record holder Steve King, who once reportedly rode a Severn wave for 7.6 miles through the English countryside.

The Sierra Nevadas aren’t just for skiing. A growing number of adventure junkies have recognized the potential for surfing Tahoe’s chilly, crystal clear waters when fall storms blow in. “To be able to surf and ski in the same day in Tahoe, as we’ve been able to do on a handful of days this fall, is something really special,” one surfer told ESPN.

This fiery Arctic island may seem like the last place you’d want to catch some waves, but it has a couple of major advantages. If you don’t mind donning some thick neoprene and braving near-freezing temperatures, you’ll have your pick of uncrowded breaks along the rugged shore of Iceland’s Reykjanes Peninsula, just southwest of Reykjavik. And, because the peninsula is so exposed to the North Atlantic, it gets swell from all directions all year long, according to Transworld Surf magazine. Still, you might want to wait for those endless summer days.

Not all surf spots are in sight of shore. Cortes Bank is an underwater island 105 miles off the coast of San Diego. The highest point is Bishop Rock, which sits just three feet underwater at low tide. The unique topography of this area causes waves to reach heights of 80 feet or more, attracting big wave surfers from all over the world who arrive to Cortes Bank by boat. World records for the largest waves ever ridden are regularly broken here.

Jackson Hole, Wyoming, is famous for a lot of things: access to two incredible national parks, world-class skiing, miles of mountain biking trails, whitewater rafting—and surfing. The same Class 3 rapids that send rafters barreling down the Snake River during spring runoff are also home to the “Lunch Counter,” a standing wave that has attracted surfers since the 1970s. “This year the standing wave was at a great level for surfing for over a month,” says Eric Seymour, spokesman for Jackson Hole Mountain Resort. Surfers often line up, sans lifejackets, for turns on the wave.

Home to Alaska’s first surf shop, Icy Waves, this tiny town on the northern end of the Inside Passage bills itself as the “Far North Shore,” and rightly so. During the summer months, intrepid surfers make the trip by ferry and plane—the only way to get there—to surf in view of towering Mount St. Elias.

The countryside isn’t all that’s green in Ireland. Enormous emerald waves pound Mullaghmore Head during the winter, making this treacherous Atlantic break on Ireland’s west coast a favorite for surfing daredevils. You don’t have to have a death wish to surf western Ireland, though: several breaks support the nearby city of Sligo’s multiple surf shops and surf schools.

South Africa doesn’t have a lock on the continent’s surfing destinations. In Morocco, where the Atlas Mountains meet the North African coast, you can find miles of untouched beach along the wild North Atlantic. Surf tourism is picking up in the Berber fishing village of Taghazout, led by tour operators like Moroccan Surf Adventures, who offer “surf safaris” that head all the way to the Sahara.

Where else can you take the subway to your favorite local break? New York’s concrete jungle may seem inhospitable to surfers, but the city has miles of uninterrupted beach on the Rockaway Peninsula in Queens, as well as a fiercely loyal surf scene to go with it. Within weeks of Hurricane Sandy, some locals were even hitting the waves in sight of their own gutted homes.

An artificial river flowing through southern Germany’s biggest city, the Eisbach forms a meter-high standing wave that begat the sport of river surfing in 1975, according to RiverSurfing.ca. This dangerous wave isn’t for beginners, but that doesn’t stop people from lining up for their chance to rip hundreds of miles from the ocean.