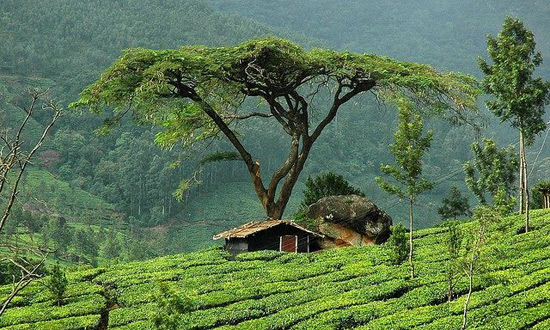 Marayur or Marayoor is a town in Idukki district of Kerala, India. It is located 42 kilometers north of Munnar connecting Munnar with Udumalpet, Tamilnadu. Marayur is the only place in Kerala that has natural sandalwood forests. Ancient dolmens and rock paintings in Marayur date back to the Stone Age. As of 1991 Marayur had a population of 9,590.

Marayur claims to be a part of a Stone Age civilization that is as old as 10,000 B.C. It is also home to a later period of large-scale dolmen-building. The land and its unique dolmens, caves, rock edicts and engravings declare its rich heritage. People migrated from Tamil Nadu to this area when the Madurai king Thirumalainaicker was defeated by Tippu Sultan, in the eighteenth century CE. Migrated people created five villages which are Kanthalloor, Keezhanthur, Karayur, Marayur and Kottakudi. These villages were called as ‘Anju nadu, literally meaning “five lands”. However these place names are very old and aboriginal tribes still live in these villages, with their unique customs.

Places to go, things to do, sights to see in Marayur or Marayoor, Kerala

Also called Muniyaras, these dolmens belong to the Iron Age. These dolmenoids were burial chambers made of four stones placed on edge and covered by a fifth stone called the cap stone. Some of these Dolmenoids contain several burial chambers, while others have a quadrangle scooped out in laterite and lined on the sides with granite slabs. These are also covered with cap stones. Dozens of Dolmens around the area of old Siva temple (Thenkasinathan Temple) at Kovilkadavu on the banks of the River Pambar, and rock paintings on the south-western slope of the plateau overlooking the river have attracted visitors. Apart from the dolmens of Stone Age, several dolmens of Iron Age exist in this region especially on the left side of river Pambar as is evident from the usage of neatly dressed granite slabs for the dolmens. At least one of them has a perfectly circular hole of 28 cm diameter inside the underground chamber. This region has several types of dolmens. Large number of them are overground with about 70–90 cm height.

Another type has a height 140–170 cm. There is an overground dolmen with double length up to 350 cm. Fragments of burial urns are also available in the region near the dolmens. This indicate that the dolmens with 70–90 cm height was used for burial of the remains of people of high social status. Burial urns were used for the burial of the remains of commoners. The dolmens with raised roof might have been used for habitation of people. Why some people lived in the cemeteries has not been satisfactorily explained.

Marayur has more than 1000 species of flowering plants and is a well known repository of medicinal plants. There are 114 endemic species and the sighting of Aibizia lathamii, a critically endangered tree, was recently reported from the dry forests. Chinnar – the wildlife sanctuary in Marayur – has recorded the largest number of reptilian species, including the mugger crocodile, in Kerala. With 225 recorded species of birds, it is one of the richest areas of south India in avian diversity. The forests in Marayur preserve a population of the endangered Grizzled Giant Squirrel. The rare white bison has been recently reported in Chinnar wildlife sanctuary. Other important mammals found are elephant, tiger, leopard, guar, sambar, spotted deer, Nilgiri thar, common langur, bonnet macaque etc. The phenomenon of butterfly migration occurs in between the monsoons.

Maryoor contains a number of sandalwood forests, and is the only place in Kerala where natural sandalwood forest is present. Processing of sandalwood and its associated oil forms part of local economy, a depot near Marayur town supporting this industry. Sandal wood or Santalum album is a parasitic tree having a fragrant and close-grained yellowish heartwood. Sandalwood oil, also known as ‘liquid gold,’ is extracted from the roots and wood of sandalwood. This oil is a costly item marketed at a few choosy outlets all over the state. A climate with low rainfall is suitable for the growth of choice sandalwood trees from which good quality oil can be extracted. The 93 km² Marayur reserve forest is believed to have about sixty thousand naturally grown sandalwood trees, of which nearly 2,000 trees had been allegedly plundered in just one year since January 2004, when the last survey was conducted. The auction rate for first quality Marayur sandal is quoted at Rs. 1100 per kg, according to forest department sources (2004).

In Chinnar, a watch tower is accessible to tourists for a minimal charge with the permission of the forest department. From this watch tower tourists can observe animals like deer, monkeys, langurs, elephants. The lofty watchtower provides a panoramic view of the entire park, stretching all the way to the jungles in the neighbouring state of Tamil Nadu and the majestic mountains far away.

The Evergreen Rain forest, Mannavan Shola is the largest shola forest patch in Kerala, is near Kanthalloor. This is a 14 km² of unique ecosystem facing devastation. The vegetation, including many rare and endemic flora and species are part of Marayur’s great natural wealth. This is one of Kerala’s unique and delicate ecosystems forever. The biggest high altitude moist-rain forest in the peninsula, located at altitude of 2100 meters. This great shola region is the haven of many rare and common species of animals, birds and plants. Mannavan shola was notified as a reserved forest through an order of the Government of the erstwhile Travancore State on October 22, 1901.

Kanthalloor is part of Marayur and known for its extensive winter vegetable and fruits cultivation. This place is unique in that various types of fruits and vegetable are grown round the year.

Kanthaloor is famous for its wide variety of crops which is not seen on the other parts of kerala, which includes varieties of Apple, Orange, Strawberry, Blackberry, Plums, Gooseberry, Egg fruits, peach & passion fruits..etc.

Kanthalloor is a virtually rain shadow village, lying in the eastern side of the Western Ghats near to Marayur. The place is famous for its cool season fruits and vegetables. Kanthalloor is famous for its apple, oranges, plums, peaches and variety of other fruits and vegetables that are not grown in other parts of Kerala. The Anaimudi Sholai National Park(Formerly known as the Mannavan Chola) is the evergreen forest surrounding Kanthalloor. The major places of attraction includes Pattisseri Dam, Kulachivayal rocks, Keezhanthoor waterfalls and the cave temple of Sri Rama.

Deep inside the Chinnar wildlife sanctuary lays the Thoovanam waterfalls. You have to take a trek into the forest in order to reach the waterfalls. It is around 60 km away from the Munnar town. You can enjoy the sights of wild flora and fauna here.

Sarkkara is dark brown sugar balls made of
condensed sugarcane juice. It is also known as jaggery. Each lump or
ball of jaggery might weigh up to 1.5 kg. Sugar cane is a major crop of
Marayur and Kanthalloor. In sugarcane farms, there are small jaggery
factories that manufacture jaggery. The best jaggery in India is
produced in Marayur. It is therefore of great demand in households
across the country for the preparation of sweets and relishes.