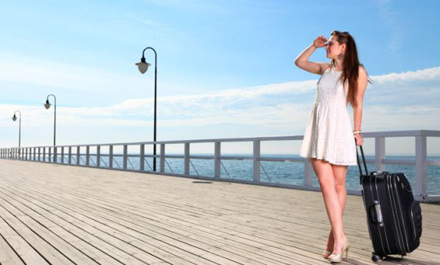 How Should I Behave When Traveling Abroad?

Tourists can sometimes draw negative attention to themselves through their behavior, actions, or words. They may inadvertently interrupt an important moment with a camera flash or litter beautiful vacation spots. Sometimes it’s impossible to avoid being recognized as a tourist, but cultural respect and a little patience can make your travels easier.

Study these five tips on how to act properly while overseas and make the most out of your vacation.

It’s surprising how many people expect their home country experience when traveling in a different place. One of the main joys of traveling is immersing yourself in a new way of living and doing things.

This means that social etiquette, food, clothing, and accommodations may be dramatically different from what you’re used to. Before traveling overseas, it’s important to learn about the environment and common practices of a foreign country. For example, if you’re visiting China for business, it’s taken as very insulting to arrive late for an appointment.

Learning about a culture’s social and work practices in advance can help you avoid awkward situations.

Travelers who are respectful in social situations will endear themselves to native citizens, who may volunteer more advice on how to get around. The easiest way to encounter resistance is by criticizing peoples’ culture. Avoid making negative remarks that highlight cultural differences.

It is crucial for you to abide by the laws of another country. You should not assume that authorities and citizens will overlook illegal activities because of your status as an American citizen.

You might be subjected to trial and punishment, which can be quite severe in some countries. National Geographic‘s television show “Locked Up Abroad” demonstrates what happens to visitors who break the law overseas. You can be fined in Singapore if you neglect to flush a toilet, for example. Avoid inadvertently breaking the law by reading up on local policies.

Visiting a country overseas gives you the opportunity to learn about new arts, try local food, enjoy recreational activities, and witness new customs. Make it a priority to visit theaters, museums, landmarks, and restaurants so you can get the most out of your overseas adventure.

Reading travel reviews can help you find vacation highlights and popular spots. Don’t be afraid to ask questions of the locals. Many people will be pleased by your interest in their culture, and will not hesitate to give you advice.

Unfortunately, we have all seen the consequences of littering and property vandalism at home and abroad. Tourists can get carried away with poor behavior, assuming they can toss litter because no one they know can see them. Litter detracts from other travelers’ experiences and can damage a landmark or the environment. Respectful behavior and observance of local customs should be a priority when you travel overseas.

Here is a sample of some of the things not to do in Japan, France, Russia, and India.