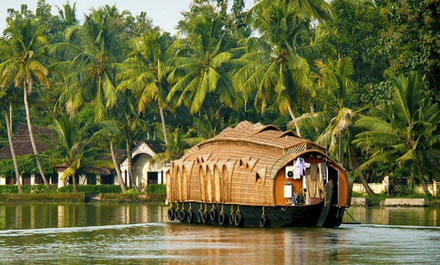 Exploring the backwaters of Kerala

The houseboats in Kerala backwaters are converted Kerala backwater cargo vessels called ‘Kettuvallams’ that used to transport rice, coconuts, coir and other commodities through the backwaters of Kerala. These cargo boats lost out to road transportation when better roads were built in Kerala.

This was about the time when tourists discovered Kerala and started coming to visit Kerala in their thousands. Most of them wanted a trip on the backwaters of Kerala, but there were not enough boats to take them around. So someone got the bright idea to convert these huge traditional Kettuvallams of Kerala backwaters into houseboats. In the beginning these houseboats had the barest of comforts, but now these old Kettuvallam converted houseboats of Kerala are not so popular as they have been replace by purposely built 5 star houseboats in kerala. These five star houseboats have super luxury facilities like air-conditioned bedrooms with attached toilets with modern European type closets and washbasins. Other facilities in Kerala houseboats include sitting room and balconies, dining facilities with fully equipped kitchen, etc.

What is Kerala Backwaters

Kerala backwaters are a chain of large lakes linked by canals, both man-made and natural. More than 40 rivers empty into the backwaters and the backwaters are connected to the sea. Water from the backwaters, either empty into the sea or there is reverse flow depending on the tide. Dams or Bunds as they are called locally, are built across some places in the backwaters in order to prevent saltwater entry, thus preserving the freshwater for use in agriculture and domestic use. One such bund has been constructed at Thanneermukkom on the road to Kumarakom from Cochin. The Thanneermukkom Bund has helped farmers of Kuttanad to grow rice on lands below sea level.

The Backwaters of Kerela extend almost the full length of Kerela. These large lakes has been used from time immemorial to transport cargo and people throughout the State. Now these lakes are the biggest tourist attraction of Kerala with thousands of visitors coming to Kerala to enjoy the beauty of the Backwaters with an Houseboat Cruise.

The main backwater lakes of Kerala are Vembanad and Ashtamudi Backwater or ‘Kayal’ as it is known locally. Vembanad Backwater is the largest of the backwater lake and has the cities of Alappuzha or Alleppey and Kumaragom on its shores. The port of Cochin or Kochi and Fort Cochin is at the outlet or estuary of the Vembanad backwater into the Arabian sea. Alapuzha or Alleppey, known as the “Venice of the East”, due to its large network of canals crisscrossing the town, is the most popular place to hire House boat trips. Kumarakom has many hotels and resorts and is the place to enjoy a relaxed stay.

A day trip on a Kerala houseboat in the Backwaters of Alleppey takes you through many canals . On the banks of these canals you can see the people of Kerala doing their daily work like washing clothes and cleaning fish, etc. You also see a lot of children playing around. It is a golden opportunity to see how the ordinary people of Kerala live their lives. Read More…