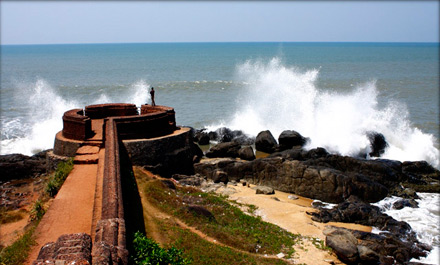 The 300-year-old Bekal Fort is one of the largest and best preserved forts in Kerala. This imposing circular structure of laterite rises 130 ft. above sea level and stands on a 35 acre headland that runs into the Arabian Sea. Buses are available every 10 minutes from Kanhangad to Bekal and Kasaragod to Bekal via Chandragiri bridge – Kanhangad state highway. (Open to visitors from 0900 – 1700 hrs.)

Situated on the Chandragiri River, southeast of Kasaragod town, this town is known for its large 17th century fort built by Sivappa Naik of Bedanore. The Chandragiri Fort, one of a chain of forts built by the same ruler, offers a breathtaking view of the river and the Arabian Sea. It is a vantage point to watch the sunset.There is a mosque nearby. The ancient Kizhur State Temple at Chandragiri celebrates the annual festival called Pattu Utsavam.

This is renowned for its chain of forts built by Somashekara Nayak of Ikkeri dynasty and also for the Nithyanandashram, an internationally recognised spiritual centre.

This is the home of the illustrious poets and scholars of Kuttamath. The ruins of a Dutch Fort built in the 18th century can be found in the Veeramala Hills. Cheruvathur is also a fascinating picnic spot.