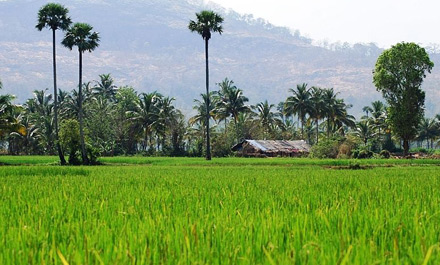 Nelliyampathy is an Amazing Hill Station on the Western Ghat Mountain Ranges in Palakkad District, Kerala State, South India. This wonderful Hill Station is one of the interesting Destinations for Ecotourism in Kerala and is located just 75km away from Palakkad Town. The green lush forests covering the whole Hill area, Coffee, Tea, Cardamom, Vegetable and Orange Plantations, Waterfalls and the misty and cool climateof Nelliyampathy Hills offers a delightful Vacation to the tourists. Nestled in the greenery of the Western Ghat, the tour to Nelliyampathy Hills will provide you with breathtaking views of the Green Valleys. Misty Green Valley of Nelliyampathy Hills is every tourist’s Dream Destination. The other important Destination, Enroute to Nelliyampathy Hills is Pothundy Dam and Reservoir. Pothundy Reservoir is situated about 17 km from Palakkad, Enroute to Nelliyampathy Hills and serves as a perfect stopover. This reservoir was built across the rivers Meenchadyppuzha and Padippuzha; both are the tributaries of Ayalar. Pothundy Reservoir is situated in the midst of Picturesque Scenery and gives a fascinating view.

Pothundi Dam is an Irrigation Dam. The specialty of this Dam is that, it is built without Cement or Concrete. A mixture of Jaggery and quick lime is used instead of Cement to construct this dam. This Dam, built in late 1800 AD is a real wonder for the new technology.

The other attractions in Nelliyampathy hills:

Seethargundu View Point is situated in the Western Ghat at Nelliyampathy at a distance of 8 km. This place is associated with Hindu Mythology. It is believed that Ram, Lakshman and Sita rested here during their fourteen years exile. Seethargundu Waterfall that flows from 100 ft gives a wonderful experience. This place gives a panoramic view of stone queries and paddy fields spread around resembling a green blanket. Seethargundu Estate is one of the best Organic farm cultivating Tea and Coffee. Mampara, Padagiri, Kesavpara and Pothundy reservoirs are some of the near by Attractions worth visiting.

Mampara Peak is the most fascinating view point located in Nelliyampathy at a height of 5250 feet above sea level. From Raja’s Cliff one can have a breath taking view of the entire Mountain range, Green Forests, Reservoirs and Waterfalls. The terrain is very
rough in most places and can be accessed by mountain Jeeps and some places only by jungle paths. This area is fully surrounded by number of Tea Gardens, Coffee Estates and Cardamom Plantations. There various wild animals such as elephants, giant squirrels, sambars and leopards inhabited in the adjoining hills. This forest also houses rare varieties of wildbirds.

Nelliyampathy’s hilly terrain and thick forest provides immense opportunities for Trekkers. As most of the hills have a height ranging from 500 meters to 1600 meters, they provide tremendous potentials for Trekkers to explore the terrain and forests. Padagiri Peak is an excellent place for Trekking.

There is a Base Camp at Kaikatty, where, Trekking and Camping facilities are provided. During the Trekking trials, tourist can enjoy the flora and fauna of Nelliyampathy Forests and also have an opportunity to watch Wildlife and Birds. Nemmara is an agricultural village situated in Palakkad district, Kerala. Nemmara and Vallangi, old trade centres, form the two parts of this village.It derived its name from the words ‘nai maariya ooru’, meaning ‘the place where ghee was traded’. Coconut tress and paddy fields surround the picturesque Village and a peaceful and harmonious village.
Ariyakode is beautiful village in Nemmara which is endowed  with scenic paddy fields and huge rocks. Many films have shot here in this village.

“Kalchadi” water falls is really a beautiful site to be watched out for especially in the winter season.

It is famous for many festivals. Nemmara Vela is well known festival enough to attract spectators from near by places. The magnificent view of Caparisoned elephants in the Vela festival is compared to Thrissur pooram for its splendor. There would be display of fireworks in connected with Vela .

The festivals and celebrations unites the people,those who are outside Nemmara makes it a point to visit Nemmara. This wonderful Tourist Destination is growing as one of the most interesting Destinations in Kerala.