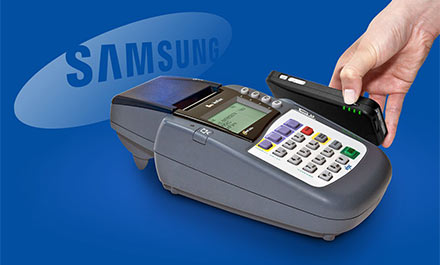 Samsung Electronics Co Ltd has bought U.S. mobile wallet startup LoopPay, signaling its intention to launch a smartphone payments service to compete with a recent offering from rival Apple Inc. The technology is supposedly compatible with 90% of all point-of-sale
terminals. This could help sales of Samsung’s next smartphones,
especially in the U.S. where traditional credit card readers are still
widely used.

Mobile payments have been slow to catch on in the United States and elsewhere, despite strong backing. Apple, Google, and eBay Inc’s PayPal have all launched services to allow users to pay in stores via smartphones.

The weak uptake is partly because many retailers have been reluctant to adopt the hardware and software infrastructure required for these new mobile payment options to work. These services also fail to offer much more convenience than simply swiping a credit card, Samsung executives said on Wednesday.

LoopPay’s technology differs because it works off existing magnetic-stripe card readers at checkout, changing them into contactless receivers, they said. About 90 percent of checkout counters already support magnetic swiping.

“If you can’t solve the problem of merchant acceptance…, of being able to use the vast majority of your cards, then it can’t really be your wallet,” said David Eun, head of Samsung’s Global Innovation Center.

Injong Rhee, who is leading Samsung’s as-yet-unannounced payments project, said the Asian giant will soon reveal more details of its envisioned service. He would not be drawn on speculation the company may do so during the Mobile World Congress in Barcelona.

He said new phones such as the upcoming, latest Galaxy would support the service.

Apple Pay, launched in September, allows iPhone users to pay at the tap of a button. Executives have lauded its rapid rollout so far, including the fact that more than 2,000 banks now support it and the U.S. government will accept Apple Pay later this year.

But Apple Pay requires retailers to install near-field communication and some have been reluctant. In addition, many retailers such as Wal-Mart Stores Inc and CVS Health Corp, back their own system, CurrentC.

Samsung had invested in LoopPay, along with Visa Inc and Synchrony Financial, before its acquisition. Terms of the deal, which Samsung negotiated over several months, were not disclosed on Wednesday.

It’s unclear how else Samsung could differentiate its service versus Apple’s or other rivals.

Rhee said in an interview that the company intends to roll out accompanying services that go beyond merely turning the smartphone into a wallet, such as by allowing users access to information such as spending.

“It’s about changing user behavior, it’s not about who’s first in the market,” he said.