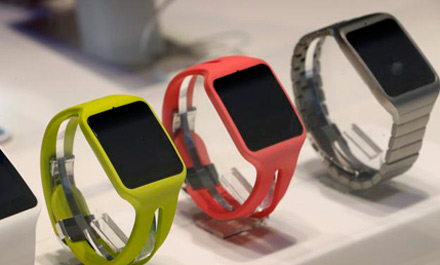 Imagine a world in which your garage door opens automatically as you pull into the driveway. At the same time, the living room lights and heater turn on. Maybe the oven starts warming up, too.

In the so-called “smart home,” cars, appliances and other devices all have sensors and Internet connectivity to act by themselves, and make your life easier.

We’re not there just yet, but we’re getting closer.

The smart-home concept is known in tech circles as the Internet of Things. Current iterations primarily include our ability to control gadgets such as lights and security alarms or view data remotely through a smartphone app. But at the International CES gadget show in Las Vegas this week, manufacturers promoted more devices and more functionality. Some of these gadgets will be able to interact with one another, not just with an app.

The Internet of Things could mean big business for gadget makers. The Consumer Electronics Association projects sales of smart-energy and security systems will total $574 million this year, a 23 percent increase from 2014.

Although that pales by comparison to the $18 billion spent on TVs and displays, growth has been swift. In terms of people smartening up their homes in earnest, though, it will probably be another two years before devices are cheap and widespread enough for the typical consumer, says Eduardo Pinheiro, CEO of Muzzley, which makes a hub that allows devices to interact with each other.

For now, the smart home is more about possibilities than practice. Many companies exhibiting at CES were laying the foundation for what a smart-home system will eventually do, hoping to entice consumers to start thinking about upgrading to smart gadgets.

It’s not always an easy sell.

Consider wearable devices that track fitness and other activities. In many cases, the novelty wears off quickly, and devices end up in drawers. But what if a wearable device that tracks sleep could start the coffeemaker brewing as soon as you awoke? When the coffee’s done, what if the sprinklers on the front lawn automatically turned off so you didn’t get wet walking out the front door to work?

Lucis Technologies will soon ship a smart-lighting device called NuBryte that can track your behavior, such as what time you tend to come home. Sensors can turn on the night light if you wake up to use the bathroom, but switch on brighter lights during the day. A coffeemaker from Smarter will soon use data from fitness trackers such as Fitbit. If you had a bad night of sleep, the coffeemaker would respond by making the java stronger that morning.

Other products focus on better notifications: a battery for a smoke detector that alerts you on your phone when the alarm goes off, or a bracelet that vibrates when the baby cries in the crib. The bracelet can even alternate which parent it alerts to get up.

“It’s got to be something people are seeing it can do and want it to do,” says Chris Penrose, AT&T’s senior vice president for the Internet of Things. “It’s got to make their lives better and be incredibly easy to use.”

“True consumer value will come when devices work in concert with one another, and, in many cases, across manufacturers,” adds Brett Dibkey, a Whirlpool Corp. vice president. “The home adapts to the way consumers live, rather than the other way around.”

At CES, Whirlpool showcased dryers that can run at a slower, energy-saving cycle if you aren’t home and thus aren’t in a rush. The dryer integrates with Google Inc.’s Nest smart thermostat, which has sensors to determine that no one’s home and then lower the heat. Meanwhile, a smart-home hub called DigitalStrom plans to take cues from Nest. If Nest is trying to cool down the house, DigitalStrom will lower window shades.

It senses what you want

These are the building blocks for an eventual automated home. Once those building blocks are in place, services can better predict what you want. For example, Netflix is already good about recommending movies to watch based on your preferences, but it might suggest something different if it could read data from a wearable device or camera and tell that you’re with friends, or stressed out, says Shawn Dubravac, senior director of research with the Consumer Electronics Association.

As we get closer to being able to live like the Jetsons, manufacturers will have to convince consumers that the technology is secure from hackers — and that convenience and peace of mind are worth any risks.

Ann Poletti, who now uses the Nest thermostat at her home in San Francisco, said her first apartment burned down, so she is sensitive to making sure all her appliances are off. The Internet of Things would let her check remotely.

“Toothbrushes and ironing boards, one day it will all be connected. I think that’s great,” says Poletti. “Some people don’t want all the data out there. I’m worried about access to my bank account — less so about whether my heat is going on or off.”