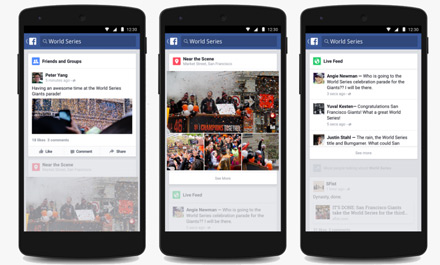 Last year, Facebook introduced a Trending section, which would show the latest trending topics on the site (similar to what Twitter already offered with its trending hashtags). The feature, which is visible on the right-hand side of Facebook’s News Feed, has been updated to include new sections and will be available to US users on the web and on the Android app as well. Facebook will roll out the updated web version of Trending to other countries soon as well bring the feature to the iOS app.

According to a blog post on Facebook’s newsroom, when users click on a topic in Trending, they will see the conversation divided into five sections. The various sections are:

This will show news publishers have covered a particular story.

This section will highlight posts from people who are part of the story. Say a story is about a cricket team or a football team, this section will show an update from their official page.

This will reveal what people in a user’s network are saying about a particular trending story. Say a letter or post has gone viral, and if you’re friends are sharing the link, you’ll be able to see their posts, along with their thoughts on that particular trending topic.

This will showcase posts from people who are at the place where the story is unfolding. For example, if there are protests in a particular part of the city and if people are posting pictures, etc from the place, then it will show under this section.

This will show users a real-time stream of reactions from people around the world to a particular story. All posts around a topic that are made under the public settings will be visible in this section.

The updates in the Facebook’s Trending section are an attempt to ensure a cleaner flow and to make it easier for users to find the relevant content around a particular topic. Also by focusing on real-time content, reactions, and live posts from the scene of the action, Facebook is targeting rival Twitter, which still holds the top spot when it comes to real-time updates, instant reactions, etc.

Given that the Android app will see this update, Facebook has made sure that this feature is coming to the mobile OS that is clearly the most used in the world right now. While the feature is US-only for now, it will roll-out to other countries and iOS soon.