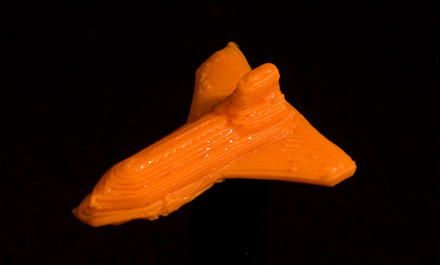 The future of medical diagnostics may come in the form of 3-D printed electronic Jell-o, according to an Australian chemist who’s working on developing edible sensors made out of materials like gelatin.

“What I’m suggesting is that we can eat our electronics and then they can perform a function and naturally go away,” says Marc in het Panhuis, associate professor chemistry and head of the soft materials group at the University of Wollongong, Australia.

With his team, in het Panhuis is developing hydrogels made from edible materials, in the hope that they can be used in 3-D printers to make all sorts of devices.

The trouble with hydrogels generally is that they’re fragile, but the group has found that using two different polymers, which form cross-linked molecular chains, makes the gels much more robust. For instance, they mix gelatin with genipin, an anti-inflammatory agent derived from the fruit of the gardenia plant. They also use gellan gum, a thickener used in pastries, sauces, puddings, jellies, and jams.

For a crosslinker, they add common salts. Soaking the gellum gum hydrogel in sodium chloride—table salt—for seven days causes it to swell and become more mechanically stable. “Together this gives you a really tough gel,” in het Panhuis told a session at the Materials Research Society’s Fall Meeting in Boston this week.

Because hydrogels contain so much water—up to 97.5 percent, in het Panhuis says—they’re naturally conductive, and adding sodium ions makes them more so. Cesium chloride gives even better conductivity that sodium chloride, but of course renders the material inedible.

The materials would be in a liquid state for 3-D printing, but would gel as they cooled over the course of a couple of hours, the same way Jell-O sets in the refrigerator. Using printable materials that have tunable electronic properties, in het Panhuis envisions building biomedical sensors that can be swallowed.

One challenge, he says, is figuring out how to read out the information such sensors gather. They’d also need to be made small enough so they can be ingested. He admits the idea is “a little way off.” But with seven years of funding, his goal is to develop something in that time frame.

Longer term, he’s hoping to develop such materials for soft robotics, for instance to make biocompatible actuators that could sense and control the pressure applied by a prosthetic hand.

Pliable, conductive materials could also be useful in so-called 4-D printing, in which a device built by a 3-D printer can change its shape over time.