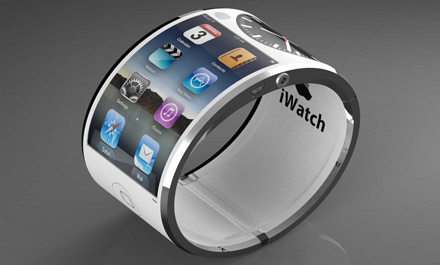 Apple’s iWatch And The Technology Of Cyber Luxury

Apple has emitted a time-release drip of information about the iWatch. Starting with John Gruber’s joke-as-leak and seeming to culminate in Re/Code’s sourceless pronouncement, the era of Apple wearables is almost certainly upon us. The most curious leak came on Wednesday from Nick Bilton at the Apple-PR-approved New York Times. According to Bilton, an Apple designer who works with Jony Ive described the Cupertino design czar gloating on the demise of the Swiss watch industry. Ive apparently dropped the “F-bomb” “in bragging about how cool he thought the iWatch was shaping up to be.” The designer spoke of Ive, “gleefully [expressing] how he thought the watchmaking nation might be in a tough predicament when Apple’s watch comes out.”

What’s funny here is not the fact that Apple’s design chief swears like a sailor or a chef—or a designer. What’s funny is that Apple wanted us to know it. This whole iPhone season featured earlier-than-usual leaks followed by more-than-usual direct briefings of journalists. This “openness” appears to be the stamp of Tim Cook. Mark Gurman of 9to5Mac wrote an exhaustive series of posts last week on the history of and changes within Apple’s PR machine.

The other funny thing about Apple is its reticence. Like a person who doesn’t say much, when they open their mouth you hang on every word. There is a confidence to Apple’s releases because if it isn’t confident, it doesn’t release. Therefore, it is axiomatic to say that the iWatch will be amazing. Because if it weren’t, Apple would just keep “pulling the string” as it is with the Apple TV.

This brings me to my real point—and the point that Ive is making about the Swiss. Unlike the smartwatches to date, the iWatch will not just be a product but a platform. I don’t just mean that it will have an app ecosystem. So do Pebble, and Google GOOGL +0.76% Wear and even Samsung Gear. The Moto 360 is an elegant instantiation of Google’s software, but it doesn’t go farther than that.
The difference with Apple is that both the chips that drive the iWatch and the software that runs it are its own. It can package the chipsets and software for sale to other manufacturers and luxury good brands—some of them in Switzerland. In the 20th century, “Swiss mechanisms” were the ne plus ultra of luxury timepieces. On Tuesday, Tim Cook will raise his iWatch-bearing hand and say, “our turn!”

Apple is not only pursuing the luxury channel with the iWatch. Health, fitness, the connected home and electronic payments are each significant drivers of customer adoption. But it is the appeal to status and the invention of cyber luxury that Apple is most confident of. Just look at the trio of European fashion heavyweights it has brought on board. Ahrendts, Deneve and Pruniaux are not at Apple to sell medical devices!

I got a peek into Apple’s possible strategy from Omri Yoffee, CEO of the Israeli wearable tech company LifeBEAM. If there are any discussions between the two companies, Yoffee is not saying, but the strategy he laid out to me is like what Apple may be embarking on with the iWatch. LifeBEAM got its start making highly-accurate biometric sensors for fighter pilot and astronauts. These are mission critical wearable devices, quite literally. They protect lives and expensive equipment from harm in extremely challenging situations.

LifeBEAM specializes in optical sensors for a wide variety of body locations. These can capture data from the forehead, temple, inner ear, arm, wrist and foot. It packages these as compact components for wearable applications from bike helmets to clothing. It’s current components are part of its first generation Ray Platform. This provides “plug-and-play bio-sensing technology that delivers the most accurate pulse and activity data available.” Most striking is that there are two more generations in the pipeline (Spark and Flare, respectively.) LifeBEAM combines the quality of its existing sensors with the promise of continued innovation. This make it an attractive supplier for wearable manufacturers.

With the iWatch, Apple will be selling this promise of high-quality hardware combined with the software and data infrastructure that drives it. As LifeBEAM shows, Apple is not the only vendor that makes these kinds of promises, but it is the most important one. To follow LifeBEAM’s aerospace metaphor, the sky is the limit for what affluent consumers will pay for luxury timepieces. Bespoke sensors and software along with de rigur precious materials could make for limited edition iWatches with price points in the tens of thousands.

It is axiomatically true that if Apple is confident about wearables, consumers and the rest of the industry will be too. Apple owns the technology of luxury in this century as the Swiss did in the last.