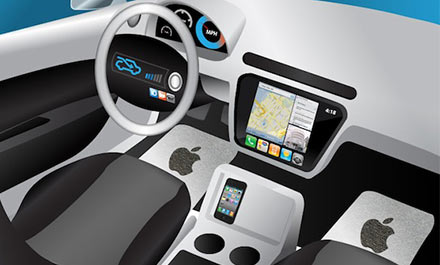 After Apple’s much sought after iPhone, you may soon get to drive an Apple car!

According to a report from The Wall Street Journal, Apple has put hundreds of employees on the project, which is codenamed “Titan”, and is being led by Steve Zadesky, a former Ford engineer who helped develop the iPod and iPhone.

Recent changes in the auto industry could give Apple an edge over other companies with the rise of information technology in and around the car — the emphasis on telematics, active safety, and driver and passenger interface — being the new trend.

More and more, automakers are becoming tech companies. Any car made today has dozens of computers inside it, so Apple would come in with some core competencies already intact.

“I don’t know how you’re not somewhat worried about that as an automotive company,” Karl Brauer, a senior analyst at Kelley Blue Book, was quoted as saying by wired.com.

Experts guess that Apple can spend something around $5 billion on the effort. An incumbent automaker would spent $2-$4 billion over seven to 10 years on a clean sheet design.

Apple, which does not have the proper infrastructure and industry connections in place, may still have to build these, which might include creating a brand new car division.