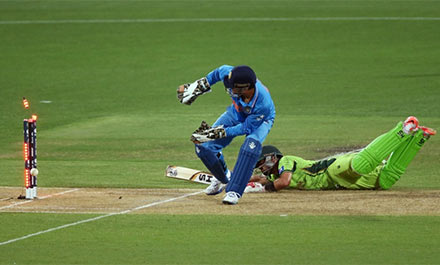 Star Sports has the broadcast rights for the 2015 Cricket World Cup, and its website and apps have live streaming as well. Whether you’re a fan in India or around the world though, we’ve got you covered.

How you can watch the ICC Cricket World Cup 2015 matches live, from around the world.

You will see details of the subscription. You can watch 53 ODIs live online for Rs. 120. This is valid only on starsports.com and not on any of its apps. You can watch games through a Web browser on any device.

3. Once you’ve done that, you can watch games live by going to the Star Sports website and clicking Login on the top-right.

This subscription is valid in India only, though the website offers different packages in other selected regions. According to Star Sports, live streaming will be available on startsports.com in territories that do not have a television broadcast of the ICC World Cup 2015. In other countries, the digital channels of official broadcasters will carry the streams.

Star Sports app – Watch India vs. Pakistan Match and other games for free

Download the Star Sports app for Android or iOS. The app is offering free video stream of the World Cup 2015 matches that’s delayed by around an over’s play – a small tradeoff for something that’s high quality, legal, and free.

If you are a Tata Sky subscriber, you can use its iOS and Android apps
to watch Star Sports on your phone. You need to pay Rs. 60 per month to
be able to watch all channels you’ve subscribed to online, and there’s
no extra charge for Star’s channels.

OSN Sports Cricket HD and OSN Sports 1 HD are the channels where cricket fans can watch the live matches played in Australia and New Zealand from February 14 to March 29, 2015.

Both of the UAE’s telecom operators — etisalat and du — are telecasting the live matches on their respective networks.

Enjoy the thrill of the Cricket World Cup 2015 with our OSN Packages. Offering full coverage of live games, highlights, the latest news, and the capability of watching from anywhere on your computer, TV or smartphone for free with the OSN Play App* – available exclusively to du TV subscribers.

Packages to watch the Cricket World Cup 2015 on du:

OSN Pehla packages start from Dh108 per month and new subscribers can choose from a selection of packages. ESPN will be streaming the cricket to Stateside audiences – even those without a cable subscription. It’s all part of a move to boost the popularity of the sport in the U.S., which, while enjoying a strong following in much of Asia, Europe and the West Indies, isn’t as closely followed by a consumer market that prefers its NBA, NFL, MLB and such.

The one-off, untethered package costs $99.99, and offers the full works as far as the CWC is concerned. You get live broadcasts of every single match, action replays and highlights of all the best bits, as well as ESPN’s very own Match Point show, offering analyses from some of the biggest names in the sport.

Once you’ve snapped up the offer, you’ll be able to log in and enjoy the coverage on all devices, including Android, iOS, and Apple TV.

You can download the ESPN Cricket 2015 app for iOS from here, Android here.

Sky Sports subscribers in UK can already use Sky Go to watch the matches on mobiles or laptops.

Subscribers can stream the matches on a range of devices including smartphones, computers, Xbox and Chromecast.

Elsewhere In The World

Cricket fans living in continental Europe, some other parts of Asia, and the Pacific Islands can stream the matches on starsports.com after paying a subscription fee.