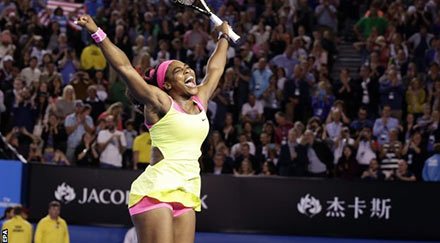 Serena Williams has won the Australian Open, beating Maria Sharapova in the final 6-3 7-6 (7-5).

Sharapova had to come up with some impressive serves, including two aces, to save two break points at the start of the second set, but Williams was not to be outdone in the serving stakes.

The American hammered down 11 aces in four service games and shrugged off the loss of a point for prematurely celebrating what she thought was another one, Sharapova somehow gettting a backhand return back into court.

That “hindrance” call led to a break point for Sharapova in the seventh game but Williams accepted it without question and went on to hold serve to keep her nose in front.

Serving second, Sharapova was under intense pressure in each service game and had to save a match point at 4-5, producing a forehand winner right into the corner that even had her opponent applauding.

A tie-break was required to decide the outcome and after losing the first point, Williams took the next four in succession before two unforced errors gave Sharapova a lifeline.

A forehand return winner then gave Williams two more match points and after Sharapova had saved the first, Williams thought she had served an ace on the second, only for a let to be called.

Williams managed a rueful smile before composing herself and thumping down her 18th ace of the match to seal a 6-3 7-6 (7/5) win after an hour and 51 minutes.