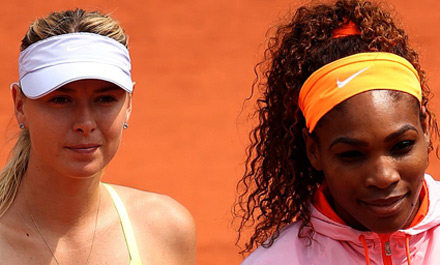 Serena Williams and Maria Sharapova have set up a grudge Australian Open final between the world’s top two players, with the Russian desperate to break 10-year jinx against her arch-rival.

The result renews an intense rivalry between two of the great of the modern era, with 23 majors between them – 18 for Williams and five for Sharapova.

The statistics heavily favour Williams, 33, who has a daunting 16-2 record over Sharapova, with the Russian failing to defeat her American rival for more than a decade.

“I’m excited. I love playing her. I look forward to it,” said Williams, who will keep her world number one ranking simply by making the final, regardless of the result.

A win would take her major tally to 19, overtaking Chris Evert and Martina Navratilova on the all-time Open-era list to out her within striking distance of Steffi Graf’s 22.

At 33, she said she had nothing to prove after a glittering career and was approaching the final relaxed and determined to have fun.

Williams has made the Australian Open final five times previously and won every time, including a 2007 victory over Sharapova.

She faced a tough workout against Keys, going down a break before surging home 7-6 (7-5), 6-2 and said that against Sharapova she needed to avoid the slow starts that have dogged her tournament.

“It’s going to be important for me to get off to a good start, I think. With that being said, if not, I’m going to be ready to fight,” she said.

The reigning French Open champion said she was concentrating on her form during this year’s tournament, eliminating four seeds including rising star Eugenie Bouchard, rather than past losses to Williams.

“I think my confidence should be pretty high going into a final of a grand slam no matter who I’m facing and whether I’ve had a terrible record, to say the least, against someone,” she said.

“It doesn’t matter. I got there for a reason. I belong in that spot. I will do everything I can to get the title.”

Sharapova was at her intense best demolishing Makarova 6-3, 6-2 to make the ninth major final of her career, overcoming her opponent’s early resistance then ruthlessly pressing home her advantage.

Quizzed on why her record against Williams was so poor, given her strength against other players on tour, Sharapova said she probably over-reacted to the American great’s power and aggression.

“I think that’s always made me a little bit too aggressive, maybe going for a little bit more than I had to,” she said.

“She’s great at making players hit that shot that you don’t necessarily have to go for – maybe going for a little too much, going on the line.

“It’s been a really difficult match-up for me, but I’m a competitor. I’ll go out and do everything I can to try to change that result around.”