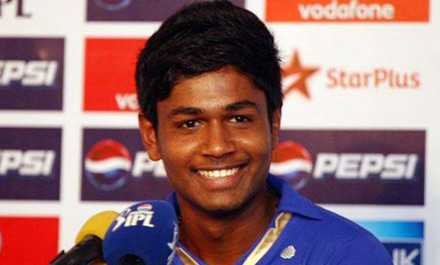 Kerala wicketkeeper-batsman Sanju Samson and Railways’ allrounder Karn Sharma have been named in India’s 17-man squad for the five ODIs and one-off Twenty20 against England. Mumbai seamer Dhawal Kulkarni, who was picked in the ODI squad for the home series against West Indies last year but was then ruled out with injury, has been included once again.

Skipper MS Dhoni, Virat Kohli and Rohit Sharma among others make a return after they were rested for the three-match ODI series in Bangladesh. Robin Uthappa, who had a decent outing in Bangladesh, but struggled to make a mark in the tri-series Down Under, where India A won, has also been overlooked by the selectors along with Cheteshwar Pujara.

Samson has long been touted as one of India’s most impressive young batsmen and star for the future.

The 19-year-old Samson, who is mentored by Rahul Dravid at Rajasthan
Royals, was in outstanding form for India A in the quadrangular series
in Australia scoring 244 runs in seven matches. In Ranji Trophy, he has
scored 530 runs at an average of 58.88 and has been scoring heavily in
the last two editions of the IPL.

BCCI secretary Sanjay Patel said the selectors emphasised on youth for the World Cup, which will be held Down Under in February-March next year.

“For the selectors, the emphasis was on picking young players for the series. All the players, whom we have picked up in the ODI series are young,” said Patel.

Patel also said that Amit Mishra, who is with the Test team in England, has been ruled out of the series with an injury. Ishant Sharma was dropped from the ODI side and the six pacers for the series would be Bhuveshwar Kumar, Mohammed Shami, Mohit Sharma, Stuart Binny, Umesh Yadav and Kulkarni.

Stuart Binny managed to hold onto his place in the side but the star batsman Yuvraj Singh was ignored by the selectors. Ajinkya Rahane also remains in the side following his encouraging performances in the ongoing Test series. Suresh Raina, who was dropped from the ODI squad for the Asia Cup but led Team India to Bangladesh in June, also makes the cut.

India squad for five ODIs and one T20I: