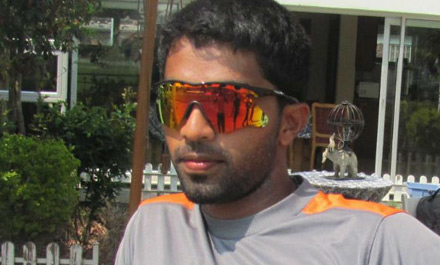 Right from the time Kerala captain Sachin Baby went past the 180-run mark on day three against Hyderabad at the picturesque Krishnagiri Stadium in Wayanad, the calm and composed demeanour that had exemplified the left-hander’s marathon knock so far had vanished. He looked jittery at the crease; he sliced the length balls just out of reach of the fielders; ran for the non-existent singles – all signs of the nervous nineties. Even though he had overcome it once when he notched up his maiden first-class ton earlier in the day, he looked out of sorts in a bid to reach the landmark.

On 199, he hit back a full length delivery straight back at fast bowler Chama Milind who could not hold on to it. Baby scampered to complete the single and leaving his bat near the pitch he ran towards his dressing-room with arms stretched out. The jubilation on reaching the milestone was evident on his face and as he walked back after completing a Robin Uthappa-like bow to his team-mates, the relief of a job well done was written all over him. An over later, Kerala declared their innings with a lead of 147.

With the double-hundred, Baby became only the second Kerala captain to reach the landmark after Balan Pandit and also notched up the fifth highest score by a Kerala player in Ranii Trophy.

“The double century was never on my mind; when I walked out to bat on day three I thought I will be at best 160 not out at the end of play, but the way Monish (Karaprambil) played gave me confidence. The Hyderabad bowlers too gave us a lot of freebies,” he said, and went on to add, “I was batting normally till I reached 160; in fact if am not wrong I hit just two boundaries between 100 and 150 and near about at 180 I went for the shots.”

Kerala did put Hyderabad in to bat for two overs but the openers Tanmay Agarwal and Akshath Reddy not only survived day three but went on to add 235 runs for the opening wicket to help their team salvage a tame draw. A day earlier, Kerala bowling coach Tinu Yohanan had confidently said that his pace battery will be able to bundle out Hyderabad, but that was not to be. Yohanan would have been disappointed as his pacers did not account for any wicket on the final day but he sure was happy for Baby. “That has to be one of the best innings I have seen. He (Baby) played with freedom and he deserved it. It was a pleasure to see him bat,” Yohanan said.

For Baby himself, the knock is something even he had not imagined. “A hundred in a Ranji game is definitely a dream for me as it is the base for Test cricket and some solid runs here is always helpful in selections, but to score 200 is just awesome,” implied Baby, whose previous best in first-class cricket was 96 that came last year.

It sure is a surprise that it took Baby 26 matches and five years to notch up his maiden three-figure mark, but that is something he put down to a lack of consistent opportunities. “The thing is I was playing only a handful of matches in the previous seasons so the opportunity to play consistently was not there. I got to play the whole of last season, and this year I am the skipper, and I am able to score runs,” Baby, who had shot to fame with his fielding abilities in the IPL while playing for the Rajasthan Royals, said.

Interestingly, the platform of first-class cricket was alien to him until his Under-19 days. “I did not know about Ranji Trophy or its importance till I played at the Under-19 level,” quips the 26-year-old. “I hail from a small town of Parli in Idduki district where cricket is not that big, nor are there any facilities. So I played my entire junior cricket travelling to Ernakulam and it was only when I started staying there did I come to know about the Ranji Trophy and how it is a platform to play for India.”

While he is literally taking baby steps in first-class cricket, he has already established himself as a useful player in the limited-overs format of the game. He led Kerala to the semi-finals of the 2013-14 Vijay Hazare Trophy, scoring a hundred and finishing the tournament as the fourth-highest scorer. The highest point in his career came when he was selected for India A against New Zealand A.

“Yes, I am more of a limited-overs format player. I was the captain last year in the Vijay Hazare Trophy. Some good performances got me selected in the Deodhar Trophy (for South Zone) and India A happened,” he said. “Robin Uthappa was there so he made me feel at home. He is Malayali and took good care of me; I never felt I was a newcomer. It was a new experience and I learned a lot even though I could play one match.”

Stints with India A and the Rajasthan Royals in the IPL have kept him in good spirits and with the responsibility of leading a young side, Baby has so far done well. For the last two years Kerala have missed out on a promotion into the elite groups (A and B) by the slightest of margins, but Baby feels this is the year they will overcome the hurdle.

“We have a good young team. Prashanth (Padmanabhan) left us, so our spin department was a bit bare but the likes of Vinoop (Manoharan) and Monish have done a good job. We have the talent and I feel it is the time to bring that to the forefront,” asserts the skipper as goes on to talk about the importance of team work. “We are aiming for a collective effort. Like this match, one guy scored a 50, there was a 200 and we were able to reach a score of 400, so we need this kind of collective effort and we will do well.”

Currently Kerala are fifth in the points table with six points after one loss and two draws and will be playing Jharkhand in Dhanbad in the fourth round.