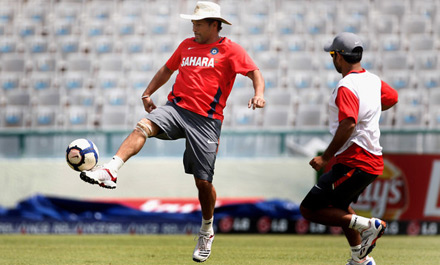 The name was announced by state chief minister Oommen Chandy after his brief meeting with Tendulkar here on Tuesday.

Tendulkar also accepted Chandy’s request to be Goodwill Ambassador of the National Games, to be held in Kerala in January-February 2015.

Tendulkar, who was given a rousing reception at the airport and government secretariat, also called on opposition leader VS Achuthanandan, seeking support in his efforts to promote football.

After meeting Chandy in his chamber, a beaming Tendulkar said he was “overwhelmed and speechless” at the love and affection showered on him by Keralites.

On the team’s name, he said: “People call me Master Blaster… One can say there is possibly an association,” he said.

Tendulkar said though he grew up playing cricket, not many know that he enjoyed other sports as well.

“I grew up playing cricket… Very few people knew that I enjoy other sports like hockey, football and badminton.”

He said the Indian Super League would definitely give a boost to football in the country.

Tendulkar said that as a Rajya Sabha member, he had submitted to the Human Resources Development Ministry his “vision” on promotion of sports and would continue to pursue that.

“With collective and positive efforts we are sure the results will be good.”

He said media support for promotion of sports was very important.

Tendulkar took the state government’s request for being Goodwill Ambassador for the National Games as a “huge honour”.

“I am very happy to be part of this and for promotion of sports,” he said.

Chandy thanked Tendulkar for accepting the state’s request in this regard.

The CM said the team owners had offered to impart training in football to 1.25 lakh students in the state.

After meeting Chandy, Tendulkar went to Achuthanandan’s official residence and presented him a jerried shawl, a gesture reciprocated by the nonagenarian leader.

“Sachin is an icon of cricket not only in India but the world over and it is a great thing that he is now supporting football,” Achuthanandan said.

Tendulkar said he was extremely delighted to meet Achuthanandan and his support and goodwill meant a lot for the Indian Super League Football.

Tendulkar and team co-owner Prasad Potlury, a Hyderabad based entrepreneur, left for Kochi in the afternoon.

When he arrived in the government secretariat, a large number of people, including the staff, gathered to have a glance.

Though brief, the event turned out to be a spontaneous one within the secretariat premises.