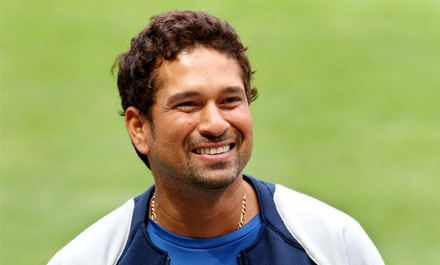 Sachin Tendulkar is the Hero in Kerala, Be it Football or Cricket

The excitement was the same for fans of Sachin Tendulkar when they saw their cricketing icon in a different role Thursday night, cheering Kerala Blasters FC, the ISL franchise that he co-owns.

The biggest cheer came when, wearing the team jersey, he walked to the middle of the ground at the half time along with Nita Ambani with his autobiography ‘Playing it My Way’.

His autobiography was released by Oommen Chandy.

“I am really excited to be here with more than 40,000 of the fans cheering our team. The whole idea of ISL is to take football to where it should belong,” said Tendulkar soon after handing his book to Ambani.

“I have been associated with Mumbai Indians for close to six years and that’s how I know her very well,” added Tendulkar.

Ahead of the match, the spectators turned delirious seeing their favourite sporting hero in the Jawaharlal Nehru International Stadium which is Tendulkar’s lucky venue because the only two five-wicket hauls in his One-Day International cricket career that the now-retired cricketer has came at this venue.

Seated beside Chief Minister Oommen Chandy watching his team play, Sachin was seen chatting with him.

Sachin is the brand ambassador of the 35th National Games that the state will host Jan 31 to Feb 14 next year.

Last year, the Kerala Cricket Association had honoured Tendulkar by naming a pavilion at this stadium after him.

Thursday’s game is the first home match for Tendulkar’s team and the final tally of spectators is 47,000.

Tendulkar along with his family arrived by a chartered flight here in the evening and after the match he flies back to Mumbai from where he will leave to London for the international launch of his book.