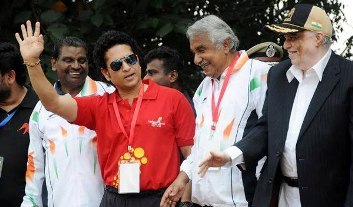 Run Kerala Run’, the curtain raiser to the 35th National Games, ‘ran’ into history when every third Keralite took part in the race held all across the state on January 20, 2015.

This event was mainly done to promote the National Games to be held from
Jan 31 to Feb 14 at 30 venues across seven districts of the state.

Chief Minister Oommen Chandy and his cabinet colleagues turned up in track suits while Tendulkar stood out in a red T-shirt with sunglasses. All eyes were rooted to the front of the state secretariat with cricket icon Sachin Tendulkar as the chief guest.

At 10.30 a.m. (local time), Sathasivam read out a pledge in English and soon after raised the flag signalling the start of the run.

Due to security reasons and huge crowd, the emminent personalities, including Oommen Chandy and Sachin Tendulkar, found it impossible to run and instead walked 200 metres and had to hop into a car to reach the Central Stadium nearby.

Addressing the public meeting, state Sports Minister Thiruvanchoor Radhakrishnan said this was a world record—more than a crore people took part in the run that took place in more than 10,000 locations all across the state.

Chandy said with this, Kerala has written itself into the record books and this showed that nothing is impossible for the southern state to achieve.

“If Kerala stands united as we did in this event, there is nothing that Kerala cannot achieve. We should stand united in all our efforts,” said Oommen Chandy Chandy.

However, the biggest cheer was reserved for Tendulkar who is also the goodwill ambassador for the upcoming 35th National Games that begin here Jan 31.

“I am not at all surprised with this response from Kerala. Kerala has always given me lots of love and respect. This run is a pre-cursor to the National Games. I will be back shortly,” said Sachin Tendulkar.

At Kochi, thousands of people took part in the main venue where cinestar Mohanlal read out the pledge.

Likewise, in all other 12 districts a similar run was conducted. Kozhikode witnessed a massive turnout, so did Malappuram and all other districts.

The Kerala government gave an hour’s break to its employees to take part in the run and so did all the schools so that students could participate.