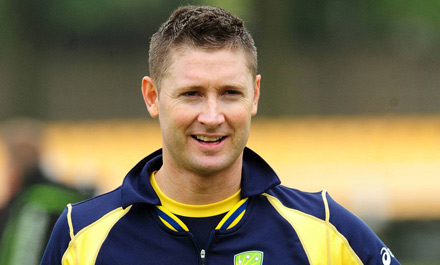 Vice-captain Brad Haddin is hopeful of Michael Clarke leading the Australian outfit in the first Test against India, after the hamstrung skipper reported to training at the Adelaide Oval.

Vice-captain Brad Haddin is hopeful of Michael Clarke leading the Australian outfit in the first Test against India, starting on December 9, 2014 after the hamstrung skipper reported to training at the Adelaide Oval, on Saturday.

“Michael had a good hit today. He is going to back up this afternoon, and be involved in our session. So I haven’t thought about it (captaincy) to be honest. Michael’s been strong for the team for a long time. I think he’s a tremendous captain and we want our captain out there playing. All signs are that he’s going in the right direction, and like everyone else, we want Michael out there leading our team in the first hour of play here in Adelaide” -Brad Haddin on eve of the first test match against India.

Clarke had put in some work at the Sydney Cricket Ground (SCG) on Friday before joining the team and Haddin is not thinking about captaincy at the moment.

“No, I haven’t,” said Haddin when asked if he was thinking about having to lead the team in Clarke’s absence on Tuesday.

Getting a grip on things after the Phillip Hughes tragedy, the Australians practised for the second consecutive day and Haddin said that they will not look to ‘complicate matters’ by over thinking about the events of the last two weeks.

“Everybody did what he needed to do yesterday. We needed to feel that cricket hurt in our legs again.The next two days are about getting back to training,” added Haddin.

“Getting that cricket feel back in your legs and getting that soreness that you get from miles from out training. From that point of view, the next two days are important to get that feel. On Sunday will be a big cricket day leading into the Test match on Tuesday,” concluded Haddin.