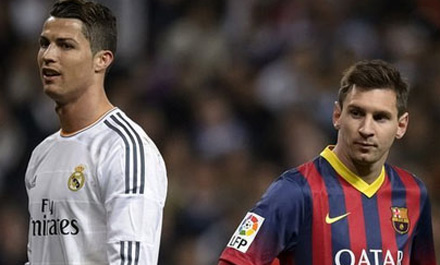 There were more than 2.1 billion tournament-related searches on Google during the course of the FIFA World Cup in Brazil.

He may not have been able to deliver the World Cup to Argentina but Lionel Messi topped the Google search results for forwards during the just-concluded event in Brazil along with Portuguese star Cristiano Ronaldo. (Related: World Cup final breaks social media records)

“Portuguese star Cristiano Ronaldo and Argentina’s Lionel Messi may have not performed to the expectations of fans this World Cup, but online search trends reveal that they retain the top spot when it comes to being the best strikers in the World Cup,” Google said in a release. (Also read: Argentina press lauds team)

There were more than 2.1 billion tournament-related searches on Google. For the record, Germany won their fourth world title beating Argentina 1-0 in the final which was decided in extra time.

American Tim Howard, who made 15 saves during the tournament, was the most searched goalkeeper beating Germany’s Golden Glove winner Manuel Neur.

Coming to defenders, football fans searched the Brazilian star pair David Luiz and Thiago Silva more than any other in the event.

Moving to the midfield, the Japanese-Chilean duo of Atsuto Uchida and Gonzalo Jara along with German’s Sami Khedira and Italian veteran Andrea Pirlo were the most searched.