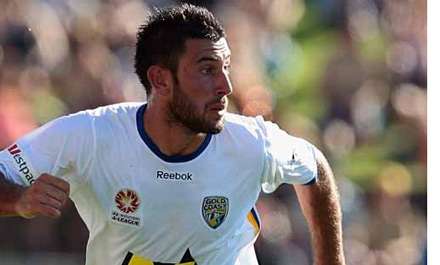 Barisic played for Melbourne Knights in 2004 and then two years later he played for Germany-based Oberliga Nord Club, Arminia Hannover.

In December 2007 he signed with his former club Melbourne Knights in the Victorian Premier League, followed by stints with Gold Coast United, Arema Indonesia and East Bengal. He played for Hong Kong First Division League Club South China in the 2013-2014 season.

The Canberra-born 28-year-old striker is thrilled about playing in the ISL.

“I am delighted to be selected for the Kerala Blasters. This is an exciting time in Indian football and I am looking forward to playing back in India again. I feel privileged to bring my passion and determination for success to the Kerala fans and under the watchful eye of such a successful and iconic owner, Sachin Tendulkar. I am determined to work hard and play harder,” Barisic said.

The 23-year-old Nigeria born Penn is an exciting midfielder and made his debut for JCT in 2009 and was a regular face of East Bengal from 2010-2013. He played for Mohammedan Sporting Club in the I-League in the 2013-14 season.