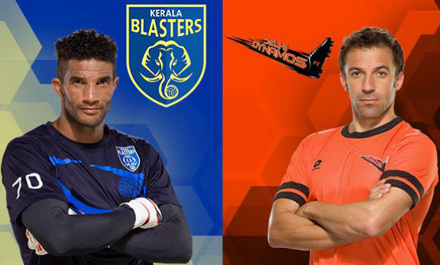 Match 27 of the Hero Indian Super League sees Kerala Blasters FC take on Delhi Dynamos FC, at the Jawaharlal Nehru Stadium, Kochi. Kerala are fresh on the back of their first home win against FC Goa, and would want to build on that as the team looks to get into a groove with two more games to be played at home. After being undefeated in their first four games, Delhi Dynamos were subjected to two consecutive defeats on the road, and would be eager to effect a turnaround and make a surge to the top half of the table again.

Kerala were without their in-form forward Iain Hume in the previous game, and he will hopefully be available for selection for the game against Delhi. For Delhi, Alessandro Del Piero did not start the game and came on as a 62nd minute substitute, and should hopefully start this crunch game.

The Nigerian Penn Orji has been an important cog in the Kerala Blasters FC attacking machine, but will look to make more direct contributions to the game, with just a solitary goal to his name in his one attempt on target so far, and no assists. He will look to impose himself on the game from the word go, with his energy and drive, but will be up against the tough-tackling Hans Mulder for the Delhi Dynamos. Mulder has showcased his ability to read opponents’ plays well and intervene timely, and with his darting runs through the middle, could cause trouble in the opponent’s box too.

Colin Falvey has started the past three games for Kerala and been part of a defence that has conceded just two goals in three matches. The burly Irishman has formed a good understanding with his defensive partner Cedric Hengbart, and will look to keep Delhi at bay, especially their main striker, Mads Junker, who is a tough man to mark. Junker, with his physicality and pace, is the focal point of the Dynamos attack, and will look to build on his two-goal tally, especially with the support he gets from Del Piero, Shylo and the rest of the Delhi playmakers.

The Tamil Nadu-born Sabeeth is a wily forward, and gets into promising positions in the attacking third time and again for the Kerala Blasters. He was instrumental in setting up Kerala’s first win in this tournament, and will be looking to come good again in front of the home crowd after coming close in the past two matches. He will be up against veteran Indian defender Anwar Ali, who has been a mainstay for the Delhi defence, starting all six of their matches so far. Anwar has been used as a ball-playing centre back in the tournament, tasked with starting attacks from the back, but will have to pay close attention to his defensive duties of keeping Sabeeth and his fellow Kerala attackers at bay.

Stephen Pearson – After a brilliant all-round performance in the game against FC Goa, Pearson will be a man to watch out for in the Kerala midfield. Pearson has kept the team ticking in all the six matches that the Blasters have played so far, and has been present in both attack and defence for his team.

Alessandro Del Piero – The marquee player for the Dynamos has put in good performances for his team so far, but has been the only marquee forward to not have scored a goal. The Dynamos attack has been dependent on him and he has shouldered the responsibility well, but the Italian, who will be celebrating his birthday, will need more support from his midfield to truly flourish in his position as a creative forward.

Harm van Veldhoven (Head coach): “We have to take the chances that we create.”