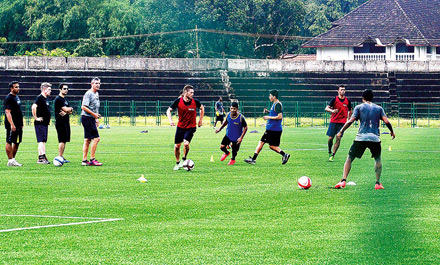 The football frenzy that gripped the state soon after the Kerala Blasters FC began its training session at the Corporation stadium here last week has rekindled the hopes of the town to regain its lost glory in the soccer tradition of the country.

Thrissur has contributed a bunch of players to Indian football, including former Indian football captain I M Vijayan, Jo Paul Ancheri, C V Pappachan, Olympian Chandrashekharan and coaches like T K Chathunni, known as the travelling coach of National Football League (India), Victor Manjila and Peethambaran, who have helped the state to cherish some memorable Santosh Trophy performances in the past.

With the soccer spirit catching up the with the people in the cultural capital, the stage has been set once again to nurture a pool of young talent. According to Jo Paul Ancheri, former England goalkeeper David James, who is also the Kerala Blasters’ marquee player and manager, has suggested an idea of setting up a football academy for youngsters in Thrissur.

A formal consultation in this regard would be convened soon with various stakeholders, including Indian Super League representatives, and if the academy comes into a reality, it would definitely be a boost for the prospects of the cultural capital, he told ‘Express’.

T K Chathunni, who has coached most of the football clubs in India like Dempo SC, Salgaocar FC, Mohun Bagan AC, Churchill Brothers SC, Chirag United Club Kerala and Josco FC, also shared same feeling, saying that the coming of well-trained foreign players and coaches to Kerala, which was once talent house of Indian team, will bring a fresh lease of life to the ailing soccer sector in the state.

Chathunny, who is worried about the state of football in his own district, said the state government and other relevant agencies should cash in on the event, taking note of the positive atmosphere existing in the state in favour of football after a long gap.

I M Vijayan, a regular visitor at the training camp of Kerala Blasters, said the training programme has been progressing well, catching the attention of youths and local football players in the town. The camp has already rekindled the passion of football lovers in Thrissur, where R B Ferguson Club, the first-of-its-kind in the state, was established on February 20, 1899, he said.