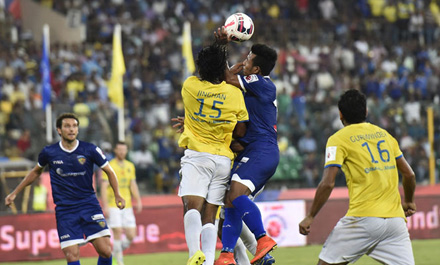 Kerala Blasters FC survived a tremendous onslaught from hosts Chennaiyin FC to win 4-3 on aggregate in the first semi-final play-off to enter the final of the inaugural Indian Super League (ISL) football competition at the Jawaharlal Nehru Stadium here Tuesday.

Chennaiyin won the second leg match Tuesday 3-1 after extra time, but that wasn’t enough to overturn a 0-3 deficit from the away leg at Kochi.

Both teams ended the match with 10 men after Kerala’s James McAllister and Chennai’s Marco Materazzi were shown the red card.

Mid-fielder Stephen Pearson scored the tie-clinching goal in the 117th minute of the contest. Chennaiyin, earlier, had produced a fascinating fightback to square the contest 3-3 in regulation time.

The home team was quicker off the block and came close on several occasions early on in the game.

Kerala, feeling the pressure, resorted to time-wasting tactics to halt the flow of the game, a ploy which earned defender Jamie McAllister a yellow card.

Chennaiyin enjoyed most of the possession and almost went ahead when striker Jeje Lalpekhlua took a first-time shot but veteran Indian goalkeeper Sandip Nandy was equal to the task.

Chennaiyin’s control of the game steadily increased and they were rewarded in the 28th minute when McAllister was sent off for a second bookable offence, unnecessarily kicking out at Bernard Mendy’s legs to be shown the red card.

Chennaiyin, buoyed by the numerical superiority, poured in forward and took the lead just three minutes before half-time. Former Manchester United and Arsenal defender Mikael Silvestre superbly flung himself to a Materazzi free-kick from the left flank to head home.

Chennaiyin went into the break with a 1-0 lead and had a golden opportunity to extend the lead right after the resumption of play when they were awarded a penalty.

Defender Sandesh Jhingan brought down forward Jean-Eudes Maurice inside the box to concede the penalty in the 47th minute only for the experienced Materazzi to send the penalty surprisingly wide.

But the home team kept its focus intact despite missing the opportunity. Kerala wilted under the pressure and conceded again with defender Jihngan chesting the ball into his own net in the 76th minute with Nandy hopelessly out of position.

With time running out, Chennayin restored parity in the tie when an unmarked Jeje opportunistically netted the third goal in the 90th minute to square the aggregate score 3-3 and stretch the contest into extra time.

The match turned in Kerala’s favour in extra time when Materazzi got evicted in the 104th minute.

Till then Kerala were content only with defending but after Materazzi’s ouster, they started moving forward with Pearson scoring the winning goal with a fierce right-footed strike.