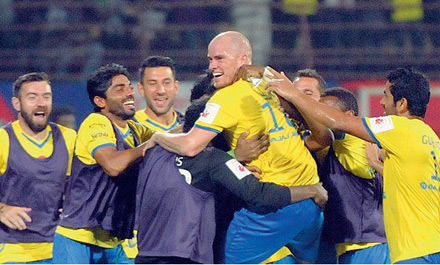 Iain Hume was the hero once again as Kerala Blasters FC defeated FC Pune City by a lone goal to seal its semifinal spot in the Indian Super League at the Nehru Stadium here on Tuesday night.

With the drawn Chennaiyin FC-Delhi Dynamos match bringing in good news, the math was very simple here: the winner moved to the last-four stage.

It was Pune which looked the inspired side in the first session. The visitors dominated the attack, crowding the midfield, and created plenty of chances. Blasters’ defence was under pressure almost all through the first half and goalkeeper Sandip Nandy was a busy man.

But it was Blasters who took the lead in the 22nd minute. Hume, who was tackled by Belgian midfielder Saidou Mady, put them ahead with a curling free-kick past the right side of the wall from just outside the box which gave goalkeeper Arindam Bhattacharya no chance. And there was a joyous roar from the 45,000-strong crowd.

Pune came up with waves of attacks after Blasters took the lead and towards the end of the opening session the home captain, central defender Cedric Hengbart, blocked a Mady shot from close range.

The match maintained its tempo in the next session too and for the first 20 minutes Blasters appeared more convincing, creating more chances. Eight minutes after resumption, Australian Andrew Barisic, who replaced Pedro Gusmao, fed Milagres Gonzalves from the left. The Goan then relayed it to Hume but the Canadian international’s strong shot was stopped well by Bhattarcharya.

A little later, after a bout of passing, Stephen Pearson danced through the middle and sent a piercing shot but Bhattacharya dived to his left and warded off the danger.

The home side survived a scare when a Krisztian Cadocz shot, off a corner, was pushed over by Nandy in the 70th minute. Soon after, the Blasters brought in forward Michael Chopra taking out midfielder Forcada. Hume too moved to the midfield.

Pune, desperate with time running out, went all out towards the end and with eight minutes of added-on time, Blasters had a lot to worry about. But defender Gurwinder Singh came up with a smart goalline save, kicking away a Katsouranis effort, off a corner.

Just before the end, the home side’s head coach David James was sent off for his reaction to Pune defender Bruno Cirillo’s tackle on Chopra. But in the end, there were celebrations everywhere with the Blasters moving to third with 19 points.

For Atletico de Kolkata (ATK) to qualify: A draw or a win vs. FC Goa. Or a loss where the margin is not more than one and involves at least five goals.

For Delhi Dynamos to qualify: On GD if Goa beats ATK by two goals or on GF if Goa wins 1-0. If Goa wins 2-1, then Delhi and ATK will be level on GD & GF. Delhi and ATK drew both matches; ATK has the away-goal advantage.