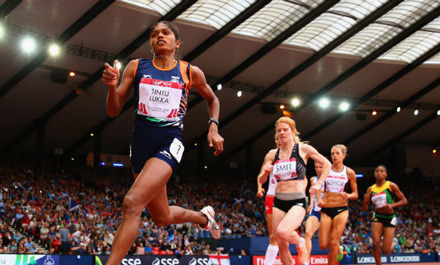 Quarter-miler Tintu Luka, who won one gold and silver, would get Rs.25 lakh and her coach PT Usha would get Rs 2 lakh.

Kerala Chief Minister Oommen Chandy on Wednesday awarded Indian hockey goalkeeper PR Sreejesh, the hero of the Asian Games final, a cash award of Rs 15 lakh and also offered him the job of a district educational officer in the general education department.

Chandy visited Sreejesh at his residence in Kochi on Sunday after he arrived from Incheon where the Indian hockey team beat Pakistan in the final to win the gold after 16 years.

Chandy assured him that a decision on his job would be taken Wednesday at the weekly cabinet meeting to be held here.

“We have decided to give Sreejesh a job of district educational officer and Rs 1.5 million as cash prize for the gold medal,” said Chandy to reporters here after the meeting.

Chandy also announced cash awards for Malayalee athletes who had won medals in the Asian Games.

Quarter-miler Tintu Luka, who won one gold and silver, would get Rs.25 lakh and her coach PT Usha would get Rs 2 lakh.