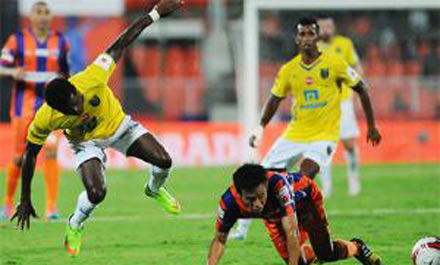 Hosts keeper Emanuel Belardi’s exit early in the second half due to injury led to their debacle as substitute keeper Arindam Bhattacharya conceded a rather soft goal to Orji.

The hosts took the lead thanks to a David Trezeguet volley in the 15th minute off a quickly taken free-kick by Dutch striker John Goossens who had started in place of Ivan Palacios.

However, Kerala pressed on and succeeded in drawing parity in the 41st minute. CS Sabeeth guided in a header off French defender Cedric Hengbart’s flag kick. And then, Orji, who was introduced in place of Brazilian striker Pedro Gusmao in the 62nd minute, proved effective just after three minutes on the pitch.

A throw-in from the right to Iain Hume and the Canadian striker did not waste time in setting up Orji who had a one-touch left footer into the first post past keeper Bhattacharya. It was a case of inspired substitute beating a forced substitution.

The win took Kerala to four points from as many away matches and up to fifth spot while Pune remain on four points and drop to sixth.

The evening clearly belonged to the visitors who showed more character and sense of urgency. They made their intentions clear from the start going in with a 4-3-3 formation. It proved effective, especially early on, when it came to ball possession and offensive moves. Pune, who stuck to 4-4-2 combination, underwent some nervous moments in this phase.

Intense action early in the game resulted in the referee whipping out two yellow cards within the first five minutes. Tapan Maity (FC Pune City) warranted the first in the third minute for an ugly tackle on Brazilian striker Pedro Gusmao.

However, a quick free-kick by Goossens in the 15th minute caught visitors unalert.

MAN OF THE MATCH

Iain Hume: The Canadian striker was not among the goals for Kerala Blasters but created plenty of opportunities for his teammates. Penn Orji’s winner was crafted by him with a fine cutback.

Attacking Kerala Blasters medio Penn Orji’s introduction in the 62nd minute proved out to be a masterstroke by coach Trevor Morgan. Three minutes later, he cooly booted home the winner with his left foot past keeper Arindam Bhattacharya.Prior to that FC Pune City losing keeper Belardi to injury five minutes into the second half sent the hosts on the backfoot.