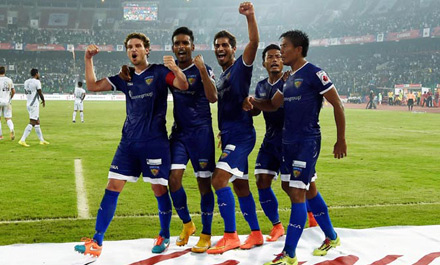 Chennaiyin FC will look to maintain their top spot in the standings when they take on Kerala Blasters FC at the Jawaharlal Nehru stadium here Sunday.

But defeating the hosts won’t be an easy task for visitors Chennai as the Blasters are yet to lose on their home ground so far in the tournament.

The task is even harder for Chennaiyin FC in the absence of their star player Elano Blumer, who is also the tournament’s highest scorer with eight goals.

The Brazilian injured his calf against FC Pune City in a group match earlier in the competition and will be out till Chennaiyin’s final group match.

The Marco Materazzi-coached side are approaching this match on the back of a humiliating defeat against NorthEast United FC 0-3, which snapped their seven-match unbeaten run in the campaign. They have accumulated 19 points from 11 matches, ahead of second-placed Atletico de Kolkata (16 from 10).

Kerala will be eyeing the second spot against their opponents as a win will help them to the second spot. They are at the fourth position with 15 points from 11 matches.