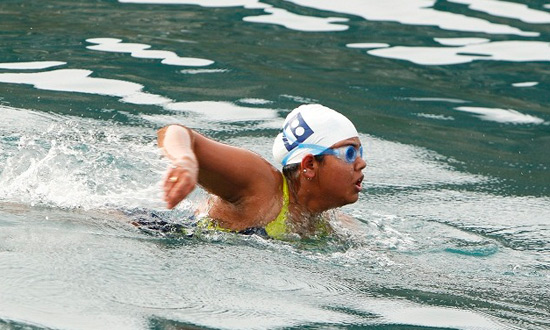 India’s open water swimmer Bhakti Sharma has set a world record by swimming 1.4 miles in 52 minutes in one degree temperature at Antarctic Ocean.

Bhakti is now the youngest in the world and the first Asian girl to have achieved this feat.

She is an open water swimmer who comes from the desert land of Rajasthan, India. Bhakti Sharma was introduced to deep waters by her mother-cum-coach, Leena Sharma at two and a half years of age. Twenty one years of hard work later, she holds the distinction of being the youngest female swimmer in the world to swim in 4 oceans (Indian, Atlantic, Pacific and Arctic) and 7 seas.

Starting off with her sport in the limits of the pool, Bhakti was a regular podium finisher season after season. Seeing her medal tally rise steeply, perhaps, her coach could sense that swimming in pools was not doing justice to her talent. Bhakti was destined for bigger things. Leena Sharma then made a decision that would change her daughter’s life for the better. She took Bhakti out of the bounds of a pool and transformed her into an open water swimmer.

Akhilesh Joshi, the chief executive officer of Hindustan Zinc, said, “We are very proud of Bhakti Sharma for this rare achievement. Whole country is proud of her and particularly girls who would be seeing her as inspiration to join swimming. Her achievement only proves that given the right support and opportunities India can produce many such talents.”

Bhakti, a recipient of Tenzing Norgay National Adventure Award in 2010, expressed her gratefulness towards Udaipur-based Hindustan Zinc for supporting her when she had lost hope for her mission and needed the support.

She has been pursuing open water swimming for the last 10 years. She has now conquered all the five oceans of the world.