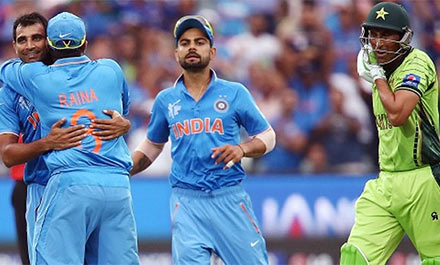 India won against long-time rival Pakistan by 76 runs, in their opening match in the cricket World Cup at the Adelaide Oval on Sunday.

Mohit ends the match as Sohail is caught by Yadav for seven on the leg side as Pakistan fold for 224 in 47 overs.

India wn by a convincing margin of 76 runs to continue their unbeaten run against Pakistan in World Cups.

A superb bowling effort from the Indians, especially the pacers as they claimed eight wickets amongst themselves.

Shami shone with wonderful figures of four for 33 in nine overs, while Yadav and Mohit picked two wickets each.

Ashwin was India’s best bowler of the day as he took one for 41 in eight overs including three maidens, while Jadeja claimed one for 56.

Kohli is named man of the match for his wonderful innings of 107 from 126 balls, which helped India post a huge total batting first.