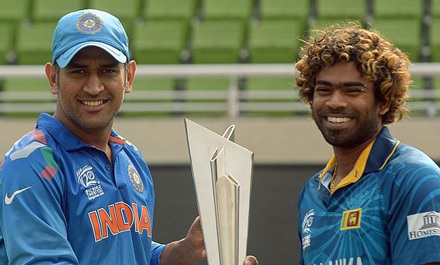 SRI Lanka face a daunting test of nerves by a dominant India in today’s all-Asian World Twenty20 final in Dhaka that is rich with incentives for both teams.

If Mahendra Singh Dhoni’s Indians win, they will become the first team to hold all three major limited-overs titles, having won the 50-over World Cup in 2011 and the Champions Trophy last year.

Sri Lanka will seek an end to an inexplicable losing streak in title matches, after being beaten twice in the World Cup finals in 2007 and 2011 and the World Twenty20 finals in 2009 and 2012.

A fitting farewell to veterans Kumar Sangakkara and Mahela Jayawardene in their last T20 international game and a million-dollar winning bonus offered by officials back home will further inspire the Sri Lankans.

Sri Lanka reached today’s final with a 27-run win over defending champions West Indies through the Duckworth-Lewis calculations in a rain-hit semi-final on Thursday.

The West Indies, chasing Sri Lanka’s 6-160, were 4-80 in 13.5 overs when a heavy downpour forced the match to be abandoned at the Sher-e-Bangla stadium in Dhaka.

Sri Lanka captain Dinesh Chandimal is again expected to sit it out, as he did on Thursday, to allow the winning combination to stay with pace bowler Lasith Malinga at the helm.

“Its a special day tomorrow and we have to do something special for Mahela and Sanga,” Malinga told reporters on Saturday.

“They are great cricketers and deserve a good farewell.”

India have enjoyed an amazing run in the tournament, winning all four Super-10 league matches before beating South Africa by six wickets with five deliveries to spare in Friday’s semi-final.

India have also been served well by opener Rohit Sharma, whose 171 runs are far ahead of the 134 runs compiled by Sri Lanka’s top-scorer Jayawardene.

Dhoni said the prospect of holding all three titles was not on his, or the team’s, mind.

“We can think of that only after we have won,” the Indian captain said. “For now, it is all about doing what will make us successful. We need to play good cricket, and not focus on statistics.

“Its a big game tomorrow. Sri Lanka are a fantastic side with a good mix of experienced and young players. We will have to be on top of our game.”

Meanwhile, defending champions Australia will take on England in the women’s final at the Sher-e-Bangla stadium a few hours before the men take the field on Sunday.