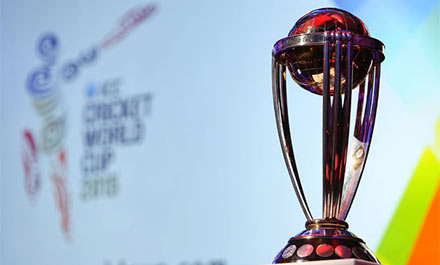 The 2015 Cricket World Cup Coverage of seven matches in 4K; 4 warm-up matches to be broadcast live.

The 2015 Cricket World Cup will be the 11th Cricket World Cup, scheduled to be jointly hosted by Australia and New Zealand from 14 February to 29 March 2015. 49 matches will be played in 14 venues with Australia staging 26 games at grounds in Adelaide, Brisbane, Canberra, Hobart, Melbourne, Perth and Sydney while New Zealand hosts 23 games in Auckland, Christchurch, Dunedin, Hamilton, Napier, Nelson and Wellington. The final match of the tournament will take place at the Melbourne Cricket Ground. It will be one of the world’s largest international sports tournaments, with 14 competing teams and more than 400 accredited players and officials taking part in it.

The start of the ICC Cricket World Cup 2015 is upon us and host broadcaster and ICC global media rights partner Star Sports is gearing up its production to make sure that the 2.5 billion people who have access to the live pictures from more than 200 territories around the world will enjoy an unrivaled spectator experience on their viewing platforms.

It won’t be possible for all cricket fans to be in the venues to watch the action first-hand so the next best thing will be ICC Cricket World Cup 2015 broadcast’s array of on-air enhancements and compelling and new graphic presentation to accompany the insightful and trusted voices of its expert group of commentators.

The production of the ICC Cricket World Cup 2015 will be in the High Definition (HD) format and audiences will enjoy the most riveting experience as each and every match will be covered by at least 29 cameras, including Ultramotion cameras, Spidercam at 13 matches and the drone camera at all the knock out matches. Technology in use includes Real Time Snicko and LED stumps. Other innovative features will be introduced for the latter stages of the event.

For the first time ever cricket will be covered using cutting edge 4K technology. To bring its viewers closer to the game, Star Sports will produce live coverage of seven matches in 4K, including the semi-finals and the final.

ICC Chief Executive David Richardson said: “We expect the ICC Cricket World Cup 2015 to be the most viewed cricket event in the history of the game. With a great line up of commentators and innovative features, it promises to be an event to remember and the biggest and greatest sporting event anywhere in the world this year.

“And for those people around the world who can’t be there in person, Star Sports and its broadcast licensees’ coverage will ensure that 2.5 billion people can view every single game from across all 14 venues in Australia and New Zealand.”

Star India CEO Uday Shankar said: “Cricket’s most prestigious event is upon us. As big as the event is, nothing is greater than brilliant sportsmanship that will eventually define Cricket’s World Cup. That defining moment may be in India successfully defending its World Champion title or a new nation rising to glory. Whatever the outcome in cricket’s greatest face-off in Australia and New Zealand, this edition of the Cup promises to be bigger and better.

While now synonymous with broadcast innovations and firsts, Star won’t rest on its laurels and would ensure that fans feel closer to the game and their heroes, like never before. The scale of the broadcast will be unprecedented. 4 production teams with 7 state-of-the-art technology kits will cover action from each of the 49 games across the 14 stadia in Australia and New Zealand in 44 days, to create an exciting visual spectacle for Cricket fans all around the world.

“The top quality action will be broadcast in multi lingual feeds in India, in seven languages, brought together by Star’s expansive world feed, Hindi and regional commentary panel consisting of 13 former skippers, 20 World Cup winners and 26 World Cup semi-finalists. We will be working closely with 45 of our channel partners across the globe, making this one of the most widely covered ICC Cricket World Cup.”

In addition to live coverage of the 49 tournament matches, Star Sports will also produce live broadcast coverage for the warm-up matches from Adelaide and Sydney.

To complement the television coverage, live online and mobile streaming will be visible on digital channels of most official broadcasters, while starsports.com will also stream the matches live in territories where television broadcast is unavailable.

There will also be extensive radio coverage of the ICC CWC 2015. In Australia, national broadcaster Australian Broadcasting Corporation will be broadcasting all matches live while CrocMedia will provide live coverage of all Australia matches, the semifinals and the final. In the other host country New Zealand, Sport Radio will provide radio coverage. Outside of the host countries, the event will have ball by ball commentary from the BBC (UK), All India Radio (India), SLCB (Sri Lanka), SABC (South Africa), 107 FM (Pakistan) and Channel 2 (Middle East and the USA).

The ICC has also tied up with news access agencies SNTV, Perform and Thomson Reuters to provide news broadcasters around the world with 90-second match highlights, subject to these highlights being used in bonafide news programmes within 24 hours of end of the relevant match, for editorial purposes only.