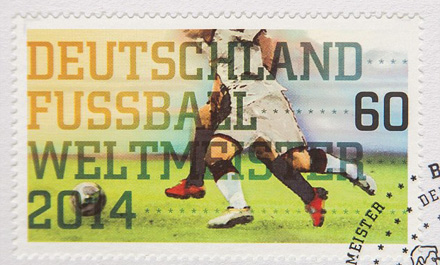 Germany will this week issue a World Cup victory postage stamp, five million of which were printed before the final was even held, sources said.

“This year I dared to hope very early on that our team would take the title,” said Finance Minister Wolfgang Schaeuble.

“It’s wonderful that the team turned this dream into a reality. I hope that this stamp will remind many citizens of the immense joy the team has given us.”

The 60-cent stamp, marked “Germany Football World Champion 2014”, will go on sale on Thursday after the first commemorative copies are presented to the coach, players and team staff.

Graphic designer Lutz Menze told DPA that the image shows footballers running, but not their faces in order to honour the whole team, not an individual.

Menze said that producing a stamp usually takes six months, but that he was only contacted by the government after the tournament had already started.

At a press conference on Monday, a journalist asked a finance ministry spokeswoman what would have happened to the print run if Germany had lost.

She said she did not know how much had been paid to print the stamps but the news conference moderator noted that had the Germans lost, “their value probably would have gone through the roof”.