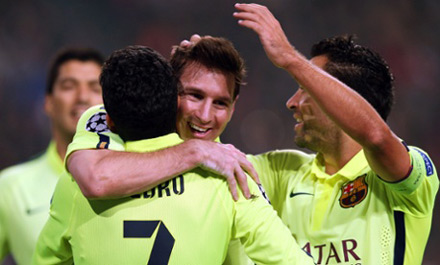 The Barcelona forward scored a brace against Ajax to go level with Real Madrid legend Raul at the top of the charts.

Messi, the Catalan giants’ star man for much of the last decade, scored his first goal on Wednesday with a header before adding another in the second half as Barcelona won 2-0 in Group F.

Cristiano Ronaldo, who is now third in the list with 70 strikes, had the chance to match Raul’s record on Tuesday night but failed to find the back of the net during Real Madrid’s 1-0 victory against Liverpool.

Of Messi’s 71 goals, eight have come against AC Milan while Arsenal have conceded six to the Argentina international – Messi found the net four times in one game against the Gunners back in April 2010 and scored five against Bayer Leverkusen in a 2012 clash.
The 27-year-old has netted twice against Manchester United with both strikes coming in the Champions League final.

Messi added to Samuel Eto’o’s opener to give Barcelona a 2-0 victory against the Red Devils in the 2009 final in Rome and scored his first goal on English soil at Wembley as the Spanish side, managed by Pep Guardiola, claimed their fourth European Cup in 2011.