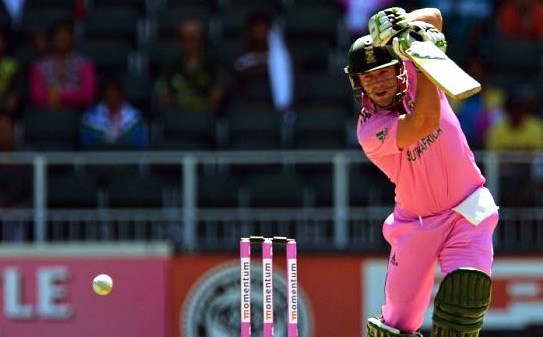 At the Wanderers in Johannesburg on Sunday, De Villiers shattered the record for the fastest century in the history of One Day International cricket by reaching his ton in just 31 balls against West Indies. His whirlwind century helped South Africa post 439 for two in 50 overs, their highest total in One Day International, but missed shattering the highest world record total by four runs.

A battered West Indies team, chasing the whopping total, crashed to a 148-run defeat after scoring 291 for seven in the 50 overs.

De Villiers walked in the 39th over after Jerome Taylor had dismissed Rilee Rossouw with the third ball of the over for 128 off 115 balls with 11 boundaries and two sixes. Opener Hashim Amla too cracked 153 off 142 balls with 14 boundaries.

The skipper began by cracking the first ball he faced from Taylor past mid on to the boundary. In the next over, he hit Andre Russell for two sixes and two boundaries.

In the 41st over, he hit Taylor for one six over long on and followed up with three sixes and one boundary in Jason Holder’s next over. With the second six of that over, he broke the record for the fastest half-century in 16 balls, shattering Sanath Jayasuriya’s mark (17 balls) against Pakistan at Singapore in April 1996.

In the 46th over, De Villiers hit Holder’s third delivery for a four to reach the nineties and hit the next three balls for sixes. With the second six of that over, he broke New Zealand Corey Anderson’s fastest century mark in 36 balls that he set against West Indies at Queenstown in January 2014.

In the 49th over, De Villiers was at his aggressive best — hitting four sixes and one boundary off Dwayne Smith. His innings ended in the fourth ball of the last over when Russell had him caught at deep over by Jonathan Carter for 149 off 44 balls with nine boundaries and 16 sixes.

Chris Gayle’s 100 from 30 balls in the Indian Premier League in April 2013 is the fastest century in cricket history.