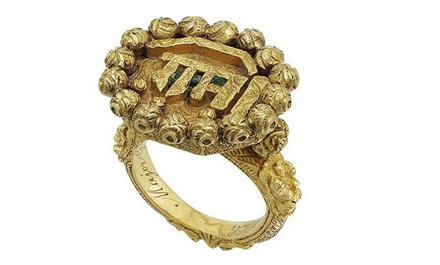 A ring belonging to 18th century ruler of Mysore Tipu Sultan has been auctioned in London amidst a controversy over the piece of jewellery, a media report said Friday.

The jewelled ring is inscribed with the name of Hindu deity Ram in raised Devanagri script and was sold for 145,000 euros (nearly $197,870) by Christie’s auction house, BBC reported.

According to the auction house, the ring weighing 41.2 gm was sold to an undisclosed bidder for almost 10 times more than its estimated price at an earlier auction in central London.

The ring was supposedly taken from Tipu Sultan’s body after his death during the Fourth Anglo-Mysore War (1798-1799). The battle was fought between the kingdom of Mysore and the British East India Company.

The controversy over the ring is about the name of the Hindu god on a ring worn by a Muslim emperor.

A group called the Tipu Sultan United Front had urged the Indian government to take steps to help prevent the sale of this ring as it is a piece of history.

The group also said that if the ring has been put up for auction, Indian philanthropists should have been encouraged to purchase it on behalf of the country.

The ring was previously listed for sale by Christie’s in 2012 but was then withdrawn from sale.

He was the eldest son of Sultan Hyder Ali of Mysore.