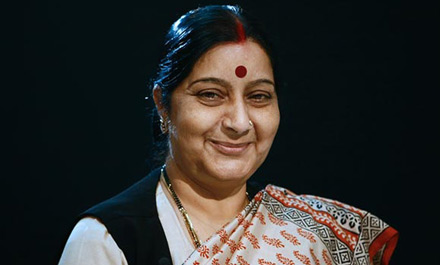 The Kerala government’s Non-resident Keralite (NRK) Global Meet-2015 to be held Jan 16-17 at Kochi would be inaugurated by Minister for External Affairs Sushma Swaraj, said a Kerala minister Friday. She will be the chief guest on the first day of the event. Incidentally, this meet is being held after a gap of three years. The last such event was held soon after the Oommen Chandy government assumed office in 2011. Kerala Minister for Diaspora K.C.Joseph, Friday launched a website globalnrkmeet.com for the benefit of the diaspora to register for the event.

The delegate fee for the diaspora meet is Rs. 500 and for those from within India it is Rs. 300. About 1000 people from various countries are expected to take part in the two-day event. Recent studies have pegged the number of Kerala emigrants at 2.5 million with 90 percent of them in the various Middle East countries.

“Kerala was the first state to set up a separate department for the diaspora. This was replicated by the centre, too. Over the years, this department has done a lot, and the biggest challenge came recently when we were able to repatriate nurses from Iraq and Libya. For this we got a huge support from the ministry of external affairs,” Joseph told reporters here.

He also pointed out that the department took the lead in rehabilitating the nurses who returned from these countries. With the help of five leading hospital groups in the Middle East, the government provided opportunities to these nurses to get new jobs.
“Six hundred and twenty three nurses have now been selected by these groups and many more would be selected in the coming months,” added Joseph. The meet, he said will discuss various issues of the diaspora. Kerala Governor P.Sathasivam would be the chief guest on the second day.