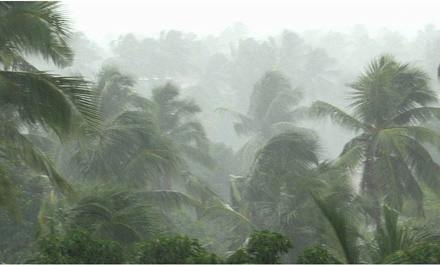 Delayed by four days, the southwest monsoon set in over Kerala on Friday, marking its entry into the Indian sub-continent amid projections of below-normal monsoon this year.

Mr. Rathore said there was “sluggish march” in the onset phase.

“We have 13 stations in Kerala and one in Karnataka that have recorded more than 2.5 mm of rainfall over the past two days — one of the most important criteria to declare its arrival,” said Mr. Rathore.

Continuous rain for over 48 hours with a westerly wind-speed of 15 to 20 knots is among two critical parameters for declaring the arrival of monsoon, which is crucial for the country and its agro-based economy.

After four years of normal and above-normal monsoon, India is expected to have below-normal monsoon this year with rainfall projected to be 95 per cent, which will be disappointing for the farming community.

Officials in the weather department had said the monsoon is expected to be below normal because of El Nino effect, which is generally associated with the warming of ocean water.

The South west monsoon, which brings good rainfall to most parts of the country, is a crucial component for agriculture and also for power generation.

Kerala, which depends heavily on hydel power, has been facing severe shortfall in electricity generation, forcing the power board to impose 45-minute load-shedding for domestic consumers since last week.

An IMD bulletin in Thiruvananthapuram said rain occurred at many places in Kerala and Lakshadweep.

Heavy rain or thundershowers would occur at most places in Kerala and Lakshadweep till June 9 morning, it said.

Fishermen have been warned of strong onshore winds from westerly direction, speed occasionally reaching 45-55 kmph, likely off the Kerala coast and over Lakshadweep area during the next 24 hours, the bulletin adds.

According to IMD, last year Kerala received 2570.3 mm rainfall during the southwest Monsoon season (June 1 to Sept 30) against the normal rainfall of 2039.6 mm, which was 26 per cent excess.