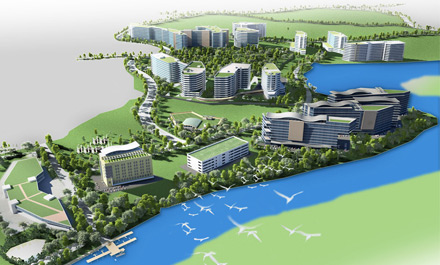 SmartCity Kochi projects’ first phase to be ready by March 2015

Chandy was speaking after attending the board meeting of the Kerala government’s much delayed prestigious IT project, which is coming up as a joint venture between Dubai Holdings and the state government.

The first phase consists of a building with 6.5 lakh square feet built-up area.

“The first phase building that consists of 6.5 lakh square feet would be ready in March and it will be inaugurated after getting the time of all concerned,” the Chief Minister said while mentioning about SmartCity Kochi, the IT township project.

The new facility is expected to provide jobs to over 6,000 people. Three companies have already expressed a desire to open up their units in this new facility.

Even though the project was conceived in 2004, when Chandy became the chief minister for the first time, it was not until Chandy assumed office for the second term in 2011 that the project could get wings and the construction work commenced.

The new facility has been built at a cost of Rs. 300 crores, including the building’s cost besides the basic infrastructure.

Work for the second phase will begin in the new year and it includes setting up of hospitals, educational institutions, and other facilities.

The entire project is coming up on a land spread over 246 acre area which has already been given the special economic zone status.