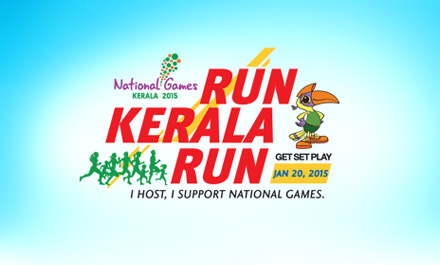 A meeting to review the preparedness of the state for conduct of the 35th National Games will be convened at the Chief Minister’s Office here on January 14.

The Run Kerala Run will be flagged off from the Secretariat at 10.30 am. The mass run, to be attended by Tendulkar, will proceed through the Cantonment Gate and will conclude at the Central Stadium and will also feature prominent city personalities as well as the public.

A public convention will be held at the Central Stadium as part of the run, the Minister said.

A meeting of the National Games Executive Council will be held at 2 pm on January 14 to be presided over by Chief Minister Oommen Chandy and attended by him and other Ministers who are district in-charges for the Games followed by the meeting of various Games committees in the evening, Thiruvanchoor said.

He said that the Trivandrum International Stadium in Kariavattom, which would host the opening and closing ceremonies of the National Games, would be inaugurated by Chief Minister Oommen Chandy at 5.30 pm on January 26.

Thriuvanchoor said that the accreditation process for athletes and officials from other states were currently underway and the Kerala State Sports Council was conducting state coaching camps in various sports disciplines ahead of the Games.

He sought the support of the public to make the Games a festival of Kerala. Thiruvanchoor released the theme song for the Games at a function attended by actor Kavya Madhavan, music director M Jayachandran and M A Wahid MLA.