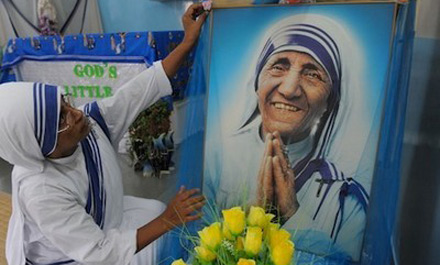 Relics associated with Mother Teresa will be kept at a new church that is being constructed at Pongummoodu, near Neyyattinkara. If things go as planned, the relics – their exact nature is yet to be disclosed – will arrive in Thiruvananthapuram this week.

‘’The relics are being given us by the Missionaries of Charity in Kolkata. We have sent a person to Kolkata to collect them,’’  said Fr G Christudas, vicar general, Latin Diocese of Neyyattinkara. The relics are being brought to Neyyattinkara at a time when the world is getting ready to observe the 17th death anniversary of Mother Teresa on September 5.  Relics can be parts of body such as nails, locks of hair or blood drops or objects associated with the venerated person. The Catholic Church classifies a relic in different grades depending on its nature. ‘’The church where the relics are to be kept will be known after Mother Teresa. The relics will ultimately be kept there, but for the time being, they will be preserved at the Bishop’s House in Neyyattinkara,’’ Christudas said.

The recipient of the Nobel Peace Prize in 1979 and various other international accolades, Mother Teresa died on September 5, 1997. The Holy See of Rome began the process of declaring her a saint after death.