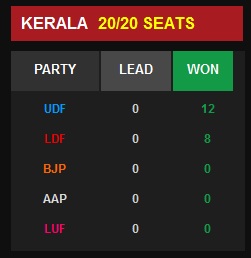 The Congress-led United Democratic Front won 12 seats, while the LDF improved its tally to eight from four in 2009

The Congress-led United Democratic Front won 12 seats in the Lok
Sabha election in Kerala, while the CPI (M)-led Left Democratic Front
improved its tally to eight from four in 2009.

All six union ministers of state in the outgoing UPA government got
re-elected to the Lok Sabha. But, the defeat of Congress spokesman P C
Chacko was unexpected for the party in Kerala.

The rout of politburo member M A Baby and central committee member A
Vijayaraghavan, respectively in Kollam and Kozhikode, are severe
setbacks for the CPI (M).

The CPI (M) could not wrest back its prestige seat Vatakara, the
hometown of slain rebel leader T P Chandrasekharan. In state capital,
where the LDF candidate reached third behind BJP, the LDF faltered as
its tactics backfired. By fielding a Nadar Christian as Left candidate,
CPI (M) had expected that party could win riding on a combo of communal
and cadre votes.

At the same time, a face saving victory for the CPI (M) came from
Idukki where Left independent Joys George defeated Congress’ Dean
Kuriakose. In Chalakkudy, another CPI (M) independent Innocent, an
actor, pulled off an unexpected victory by defeating P C Chacko.

In the last three decades, LDF had not managed to defeat a Congress
candidate in Chalakkudy (formerly Mukundapuram). In Idukki, the LDF had
won the seat twice, but with the help of regional Christian party Kerala
Congress.

Within the UDF, Congress allies IUML, Kerala Congress and RSP won all
the four seats contested by them. The only ally that could not win a
single seat was Socialist Janata Democratic. Of the eight seats lost by
UDF, seven were contested by Congress.