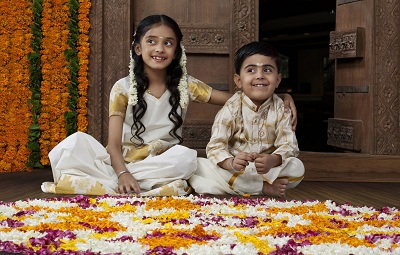 What is Onam? When is Onam in 2022 ? What is the History of Onam ? What is the Major Attraction of Onam Celebrations? Find out here

Onam is an important festival of Kerala. It’s a harvest festival that also marks the start of the new year on the Malayalam calendar. A huge range of activities take place across the state for over two weeks.

If you wish to travel to Kerala to enjoy the fun and frolic of an Indian festival, then the best option would be the time of Onam.

In 2022, ThiruOnam is on Thursday, 8 September Onam is celebrated in the beginning of the month of Chingam, the first month of Malayalam Calendar (Kollavarsham). The interesting rituals associated with the festival contribute to making the celebrations of Onam a fascinating one.

Typically, Onam celebrations last for 10 days of which the first (Atham) and the last (Thiruvonam) are the most important. A beautiful aspect of Onam is the lovely pookalams made with fresh flowers. These are designed and created by young girls and women in each household, who start making the pookalams in their courtyards from the first day of the festival and keep adding to it with each passing day till their design culminates in to a magnificent carpet of flowers, strewn in the courtyard to welcome their king.

The Thiruvonam feast is of great importance and a must-have for all Keralites; it consists of a variety of curries and delicacies besides the well-known avial, sambar and rasam and of course, the sweet rice pudding called payasam.

There are several special occasions and events which are also a part of the grand Onam celebrations. Among the most popular and rigorous of these being the Snake Boat races also known as the Vallamkali.

Also known as the snake boat race, this is one of the most entertaining events of the Onam festival. Nearly 100 boatmen compete with each other in a boat riding competition .The boats are decorated beautifully in different patterns. Men and women from across the city come to witness this race.

Pookkalam refers to making designs with different types of flowers in front of the gate of the house. With each passing day during the Onam festival, a new layer of flowers is added to the Pookalam. Some Pookalam competitions are also held at some places.

This is the grand meal prepared on Thiruvonam. Onam Sadya meal is served on a Banana leaf and is a nine course meal having at least four to five vegetables. The number of vegetables in the meal varies from house to house but most of the well off families cook nine to eleven dishes for the Onasadya. Restaurants offer as many as 30 dishes for Onam Sadya.

This refers to all the games played at the festival of Onam. Talappanthukali which is a game played with a ball, is a favorite of men. They also indulge in Ambeyyal (archery). Women engage themselves in making Pookalam and performing several traditional dances.

If one is to go by the myth, then King Mahabali or Maveli was a generous and virtuous ruler, who had once ruled Kerala. During his rule, the kingdom became so prosperous that devas (gods of the Heaven) felt jealous about this and also for the reason that King Mahabali was an asura – a member of the demon clan – who were the enemies of devas. So, they sent Lord Vishnu in the guise of Vamana (a dwarf) to King Mahabali.

As an offering from the generous king, Vamana requested Mahabali for three feet of land. And at the time of measuring the three feet of land, Vamana grew so huge that he measured all the worlds in two steps. Since he had nowhere else to place his third step, Mahabali asked Vamana to place it on his head. Pleased by his benevolence, Vamana blessed Mahabali before he was sent to the nether world and granted him permission to visit his dear subjects once in a year. This occasion is celebrated by all Keralites as Onam.